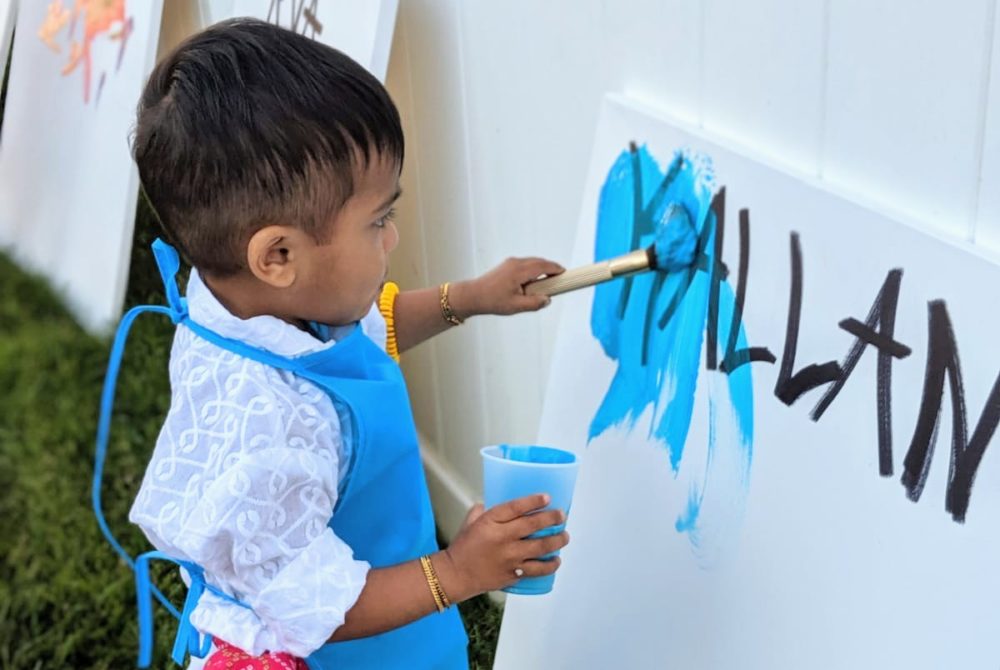 Kallan turns 2 TODAY and Dipti and Sachin celebrated in a colorful way last weekend! Dipti has always been the friend in her group who insists on exposing the kids to our culture so this year her plans were to do a Holi party for the kids. Everything from the invitation to the food was all Holi themed. She couldn’t wait to have the kids experience one of our favorite holidays of the year! Unfortunately, as the day approached, the reality of event was settling in. Dipti and Sachin are currently selling their home (post to follow) so they’ve been keeping the house in immaculate condition. Needless to say, a Holi party was not jiving with their plans.

So as Dipti‘s hopes and dreams started to shatter, she fell upon the best idea she could find that would still be color themed but not ruin the entirety of her house – a “paint your own canvas” party! 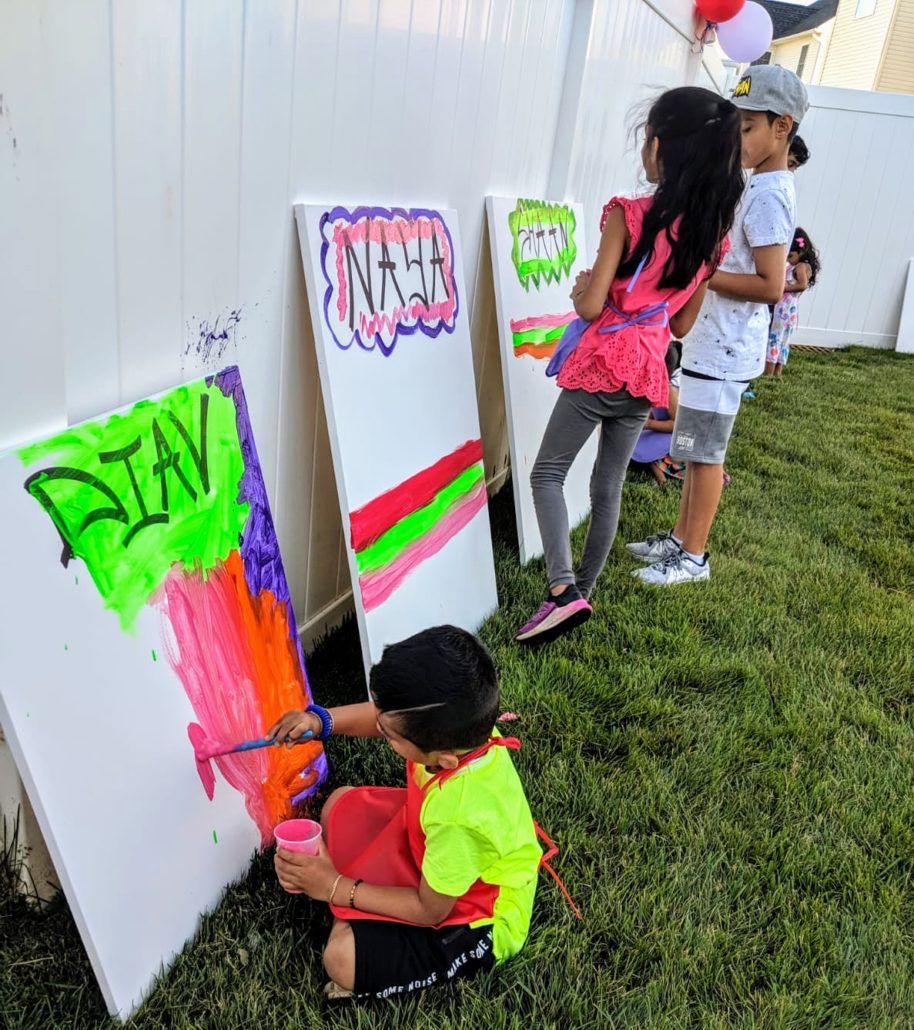 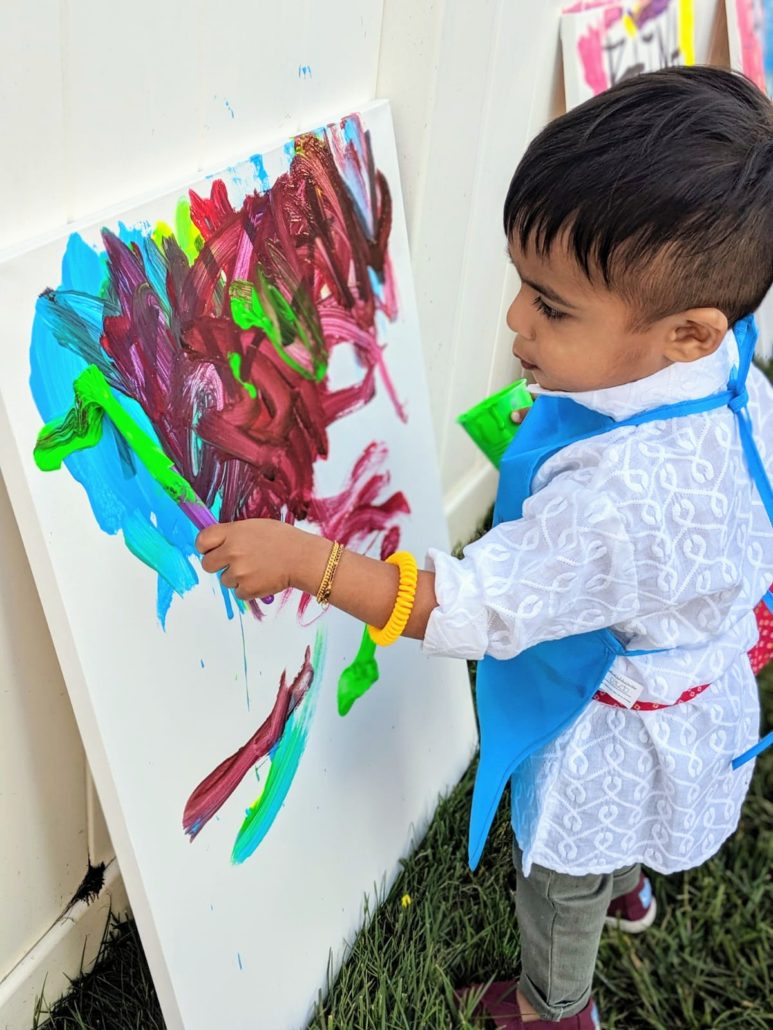 First, she bought 26 canvases for the kids – luckily Micheal’s just happened to have a 70% off all canvases sale going on and so she got them for a steal! She got sizes ranging from 30″x40″ for the big kids to 8″x10″ for the babies. She also bought 24 16oz bottles of washable, neon paint (way too much, she needed about 8) and 20 paint brushes from amazon next day delivery (she needed 24 but luckily she had some old makeup brushes she was able to give some of the kids). She also got 24 kids’ smocks to calm the parents’ anxiety. 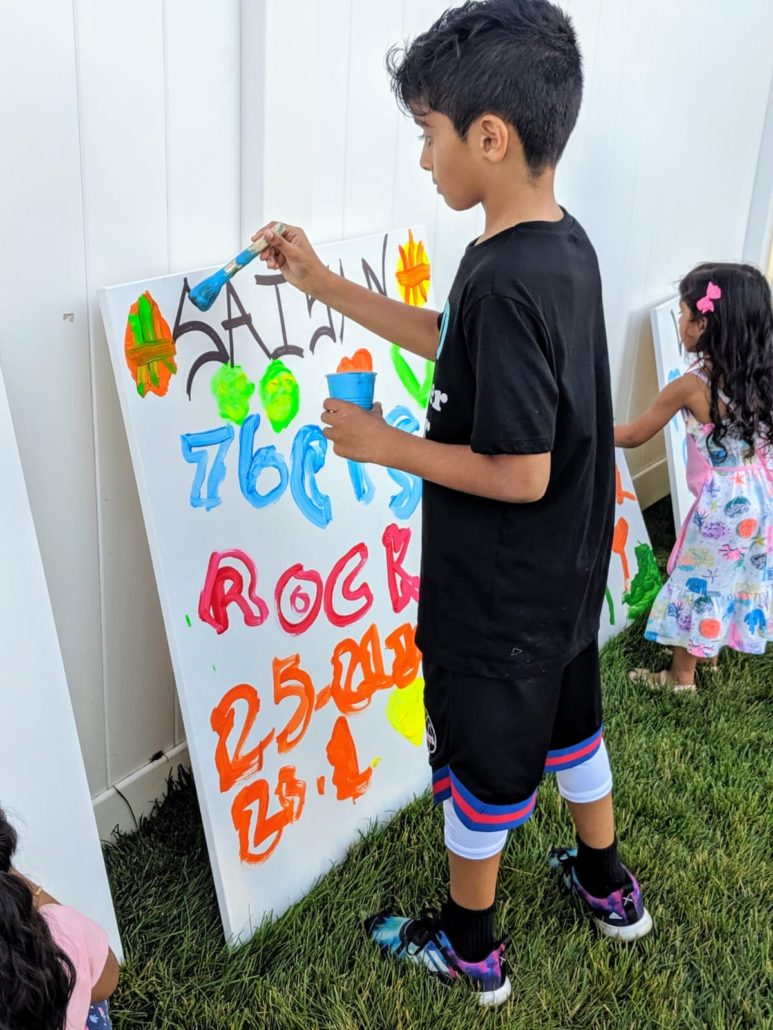 She wanted to customize the canvases somehow so she went on the hunt for letter stencils, letter stickers, anything that was big enough for the canvases. Unfortunately she couldn’t find anything, so she decided to learn how to write in “graffiti’ font and wrote all the kids’ names on the canvases herself. They weren’t anywhere close to perfect, but no one was going to notice (*wink*).

She set the canvases up along the fence, with the big kids being spread amongst the little ones incase they littles needed help. And when the kids got there, they all got super excited to point out their names! Dipti filled plastic cups with a bit of paint, handed each kid their own cup, brush and smock and let them get to work! We rotated the cups so that everyone got different colors, and by the end, most of the kids were just asking each other for the color they wanted. It ended up being so much fun for the kids and the parents loved to see their artists create masterpieces! At the end of the party, the kids all took their canvases home to hang in their rooms! It was definitely a success! 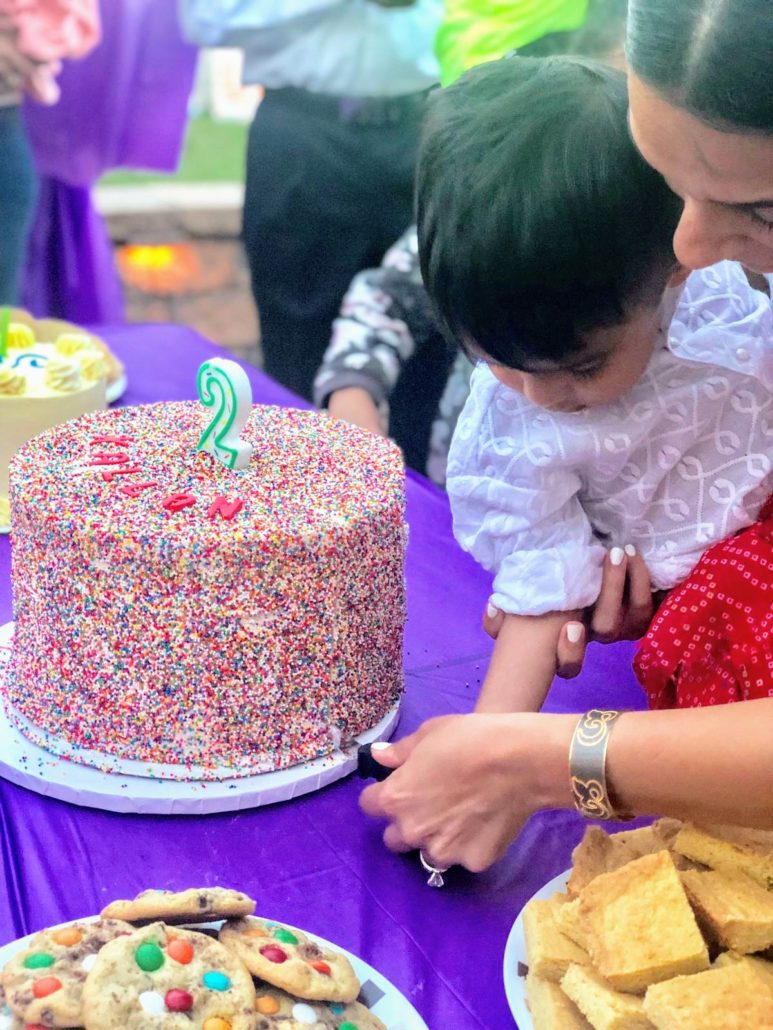 Of course, no party is complete without the perfect food. Dipti is also very adamant about getting the kids to eat Indian food so she had plenty of option for them, (and the adults)! Thank God for momma Vaid because she made everything at home! For appetizers, we had pani puri, bhel, and falafel salad (basically a deconstructed falafel without the pita bread). For the kids’ dinner we had idli sambar and pav bhaji. She also made a “in case of emergency” batch of mac n cheese.  And for the adults dinner we had paneer kati rolls. The food was to die for and thank goodness we have leftovers that we can eat for the rest of the week!

Dessert and cake – where do we start? Dipti had the dessert catered by her friend, AMR Catering, who she LOVES. She made M&M cookies for the kids, orange cardamom shortbread and strawberry rosewater shortbread. She also made the most stunning cake we could have asked for. Dipti wanted the cake to be super colorful for her original Holi theme and it was beyond what she expected. The images speak for themselves! 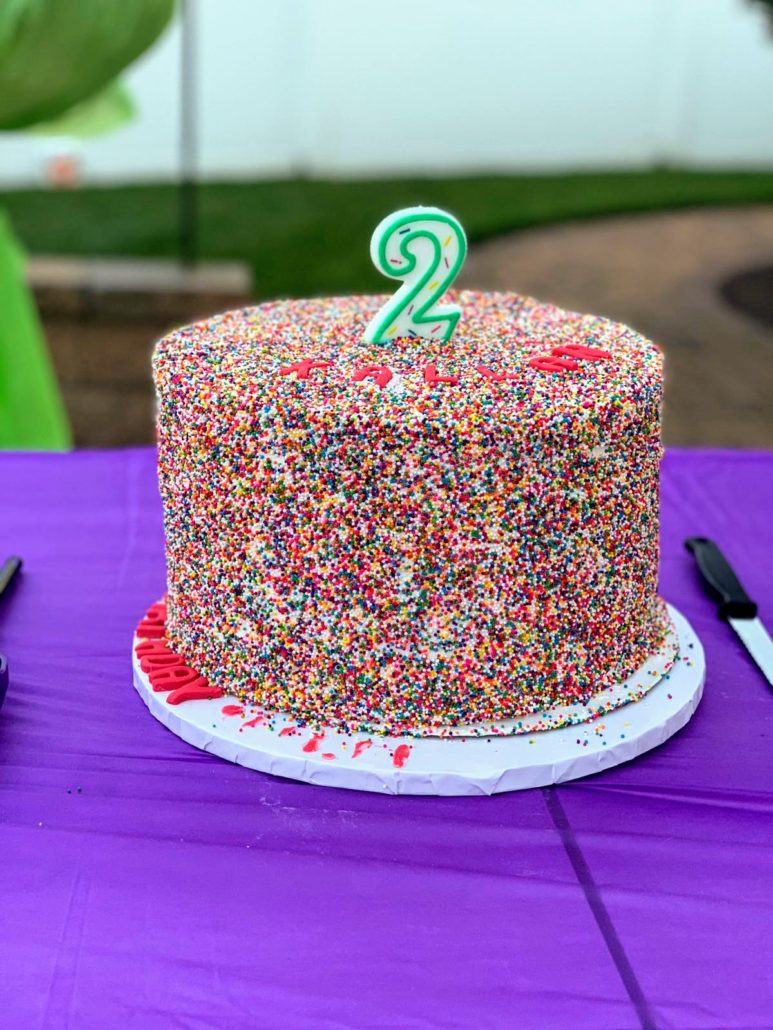 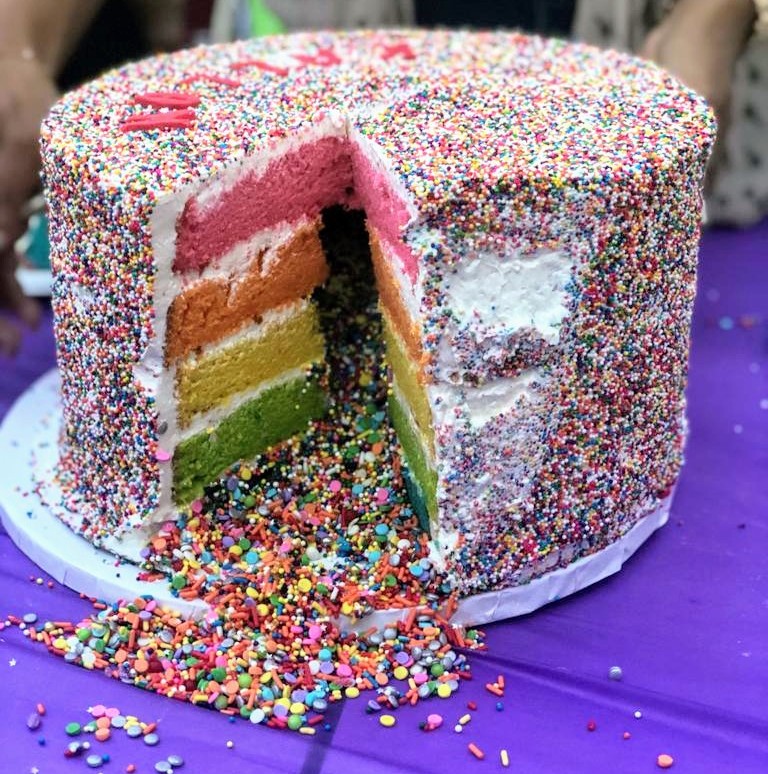 All in all, it was a great celebration! Having our family and friends together to celebrate the baby of the family was more than we could ever ask for!

A Decade of Love Celebrated