Back to (Virtual) School 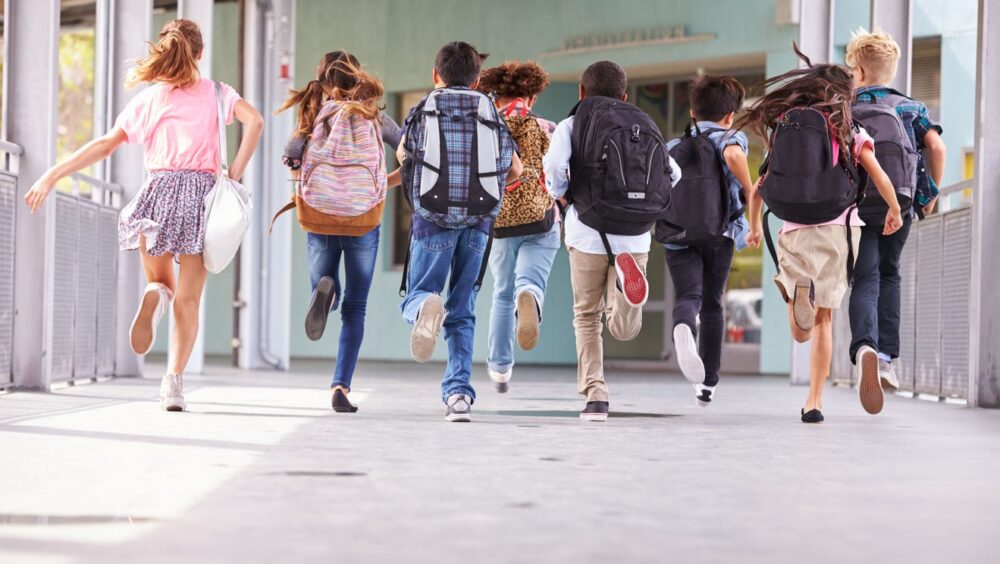 There was no right decision going into the school season Fall 2020! Every parent made their decision based on their needs, their situations and their comfort levels with this pandemic. With that said, the three of us made our choices accordingly as well and it was not an easy decision by any means. We respect and value each parents decision and are sharing our experiences with you. Would love your feedback on how “back to school” is going for you as well! 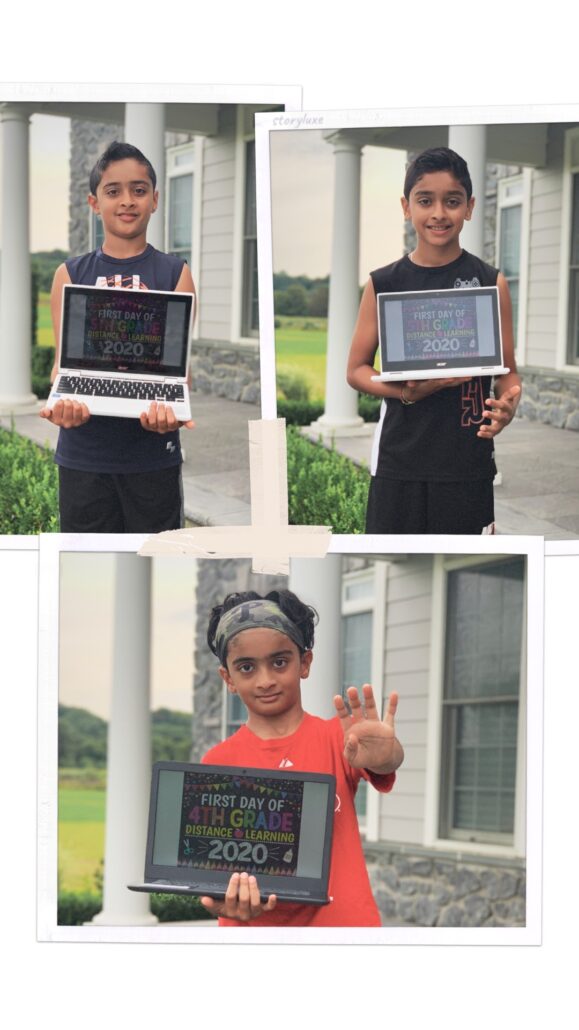 Oh the kinds of decisions we are forced to make in these times, it’s all still so mind-blowing and stressful. This school decision was definitely one of the hardest decisions Sheena has had to make in a long time, almost harder than deciding if she should marry Sammy or not 🙂 Sheena spent quite a bit of time limboing between the decision of virtual or hybrid school. Her gut was praying school would just falter to full virtual (like many towns around her did) so she wouldn’t have to make the decision at all, but that didn’t happen for her.

Sheena’s town started school a week or two after most (for construction reasons) so it was hard for her to see everyone else making and committing to decisions while she was still in such limbo. Because her boys are older, she felt it was a decision that needed to be made by her, Samir AND the boys! They are old enough to have a say and make their argument as to what they wanted to do. With that, she sat down with each individually and asked what their preference was, be it virtual or hybrid and went through the scenarios of each choice.  Sheena’s gut was always with virtual but she didn’t want to impose her decision on them.  To her surprise, all three chose virtual. They were completely fine with being home for school and leaving the risk of bringing home Covid behind them. Their main reason for this decision was wanting to continue seeing their grandparents and their new baby niece. They understood that if they were to be exposed in school, it would eliminate the possibility of visiting any of the mentioned people for us! Not to say that is the case for everyone, but that is our setup until Covid is more under control

With that decision, Sheena and Samir felt confident and comfortable choosing virtual and are now so happy that they all did too. The boys have fallen into their routine seamlessly and are actually so much more independent than Sheena thought they would be. They actually prefer mom not be around during their google meets or work time. They holler for help here and there, but all so manageable. Sheena’s biggest fear with virtual was the lack of socialization with their own age kids and them missing their favorite period of school, RECESS. She wanted to make sure they didn’t miss out completely, so she got in touch with a few of the other virtually schooled kids’ families in the neighborhood and created a snack/recess group. For 30 minutes each day the kids have a snack/recess break between classes where the 3 families rotate weeks of meeting up. The boys ride their bikes with snack in hand to the designated house, eat together on the porch and shoot some hoops, soccer or just catch up for 30 minutes and then back home to class. That little break makes all the difference in their day, which makes Sheena so happy. She is so proud of the boys for stepping up to the challenges and changes the beginning of this school year has presented. She plans on doing her part and making their virtual school experience as joyful as she can. She is confident that they will come out of this as better little humans and be more prepared to face ANYTHING the world will throw at them. 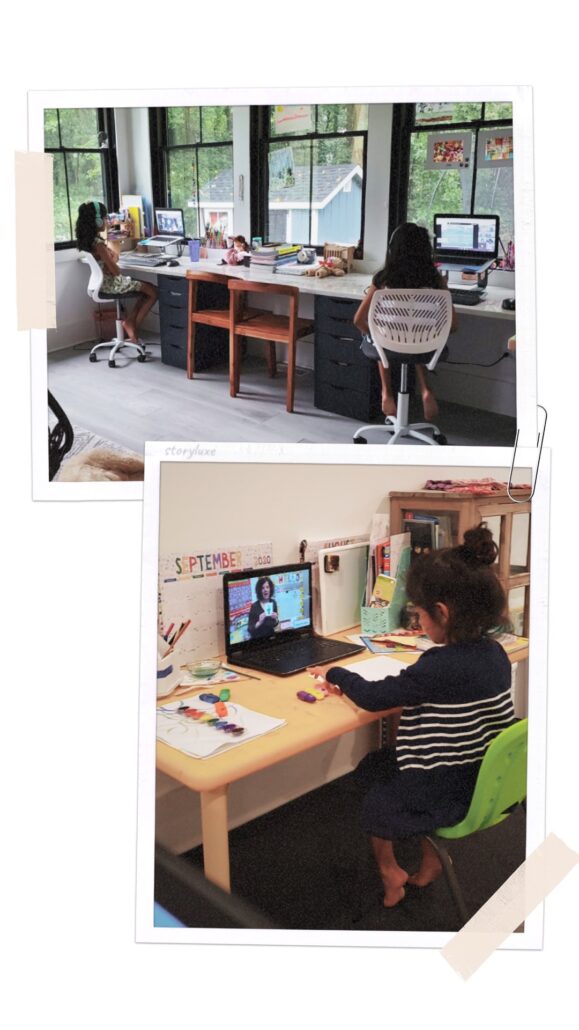 For Nina, the choice between hybrid and virtual was really tough. Every single friend (apart from one) of the older two girls were going to be hybrid. This meant that they would all be “seeing” each other while the girls stayed home. Nina was really really reluctant and considered maybe just sending them the first few weeks to get acclimated, but then decided against it. The main reasons were so that they could continue to see family – especially when we go back into shut down mode, and secondly so that occasional weekends she could ship the girls off to the grandparents homes to get a break

To her surprise, the girls have adjusted quite well and have become rather accustomed to virtual schooling. But this has only been possible thanks to their INCREDIBLE teachers, school staff and community support. Everyone has been amazing at making sure the “virtual” kids feel just as involved throughout the day as the hybrid kids. Niva’s teacher even agreed to meet her early one morning with masks and all in the back playground. It was so so so sweet. They both have their homework areas set up with things like a laptop stand, rolling chairs, dry erase boards and an accountability board (a large white board with washi tape to make a chart and magnets)..which has helped keep us all on track!

For Nesa, oh Nesa. She is as rammmmmmmmmmmmmbunctious as they come. Luckily, Nina has found that by staying in the basement with her while the older two do virtual schooling, they have found a rhythm to the madness! She has been using PreK with Miss K – one lesson a day and that has helped get Nesa excited about starting her own day! They also have a dome in the basement that keeps her busy swinging ,climbing, jumping, flipping and so on… As hard as it is to have all three home while finishing up her doctorate – Nina knows that this time will never come again and is trying really hard to cherish the moments…. 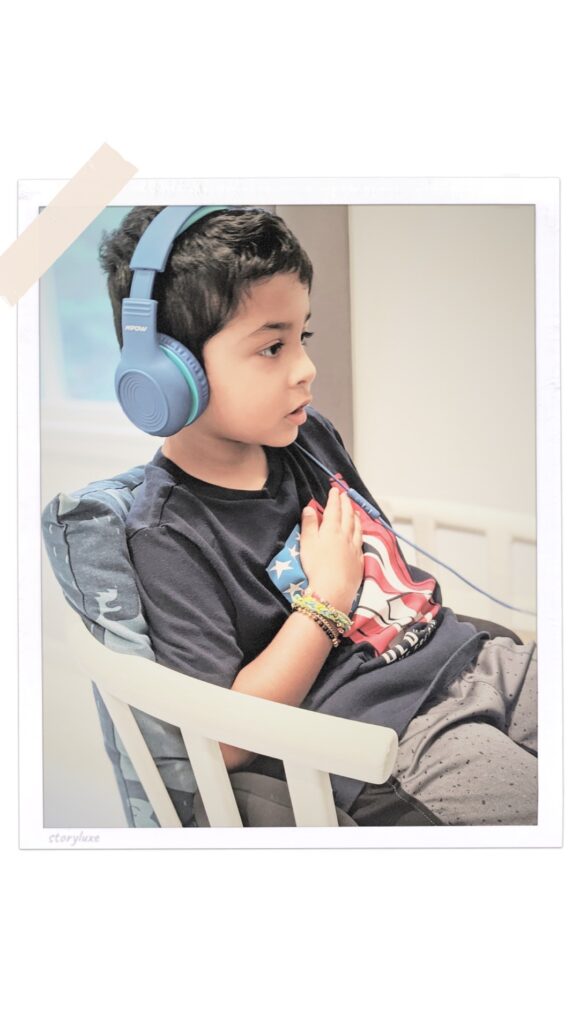 As you know, Dipti and Sachin are expecting #3 this December! Not only was the pregnancy a surprise, but everything that has followed has been completely unpredictable! Not only are we all adding another baby, but it will be the Dedhia family’s first girl!! So everyone is very excited and VERY protective of Dipti and baby (not that we wouldn’t be if it was a boy lol).

When it came time to decide if the kids would return to school, gosh it was so tempting. Sachin and Dipti are both working from home full time, with meetings all day, and two crazy toddlers running around the house.  The discussion focused mainly around the pregnancy and the exposure to the grandparents (if they sent the kids to school, they’d have to stop seeing them). They still don’t know if there’s an extra risk of exposure or worse symptoms for pregnant people, but nobody wants to find out the hard way.

Dipti also weighed the effect of Diav’s first few months of Kindergarten being online. While seeing him alone at his desk, sitting in front of an i-pad watching his teacher talk, is not the experience the parents dreamt for him, they kept reminding ourselves that this wasn’t forever. Yes, a few months of missing friends and a new teacher and new school is sad, but most of his friends are all in the same boat as him. Ultimately they decided Diav would attend Kindergarten virtually and Kallan would spend the day at home with a very covid-conscious nanny. Of course this also meant that Dipti’s family of 4 would have to stop seeing friends who sent their kids to school, because their exposure becomes Dipti’s exposure. Thankfully Diav has been taking to virtual school like a champ! Kal is doing some online pre-K classes but his attention span isn’t as great so it’s more of having him listen in the background. So for now, in the present, they’re doing great! One day the kids will all grow up and talk about what their first day of virtual school was like and how their teacher was an incredible example of perseverance, preparation, fearlessness, and love!

A little reminder every now and then really helps: this too shall pass, and while we’re in it, our only goal is to come out on the other side healthy and happy.

We wish all the kiddos an amazing, healthy, productive and successful school year ahead. We truly believe that no matter “how” you are learning, the important thing is that you “are” learning and feeding those little minds of yours. This will undoubtably shape you into the superstars we know you will be.

Behind the Scenes Part IV