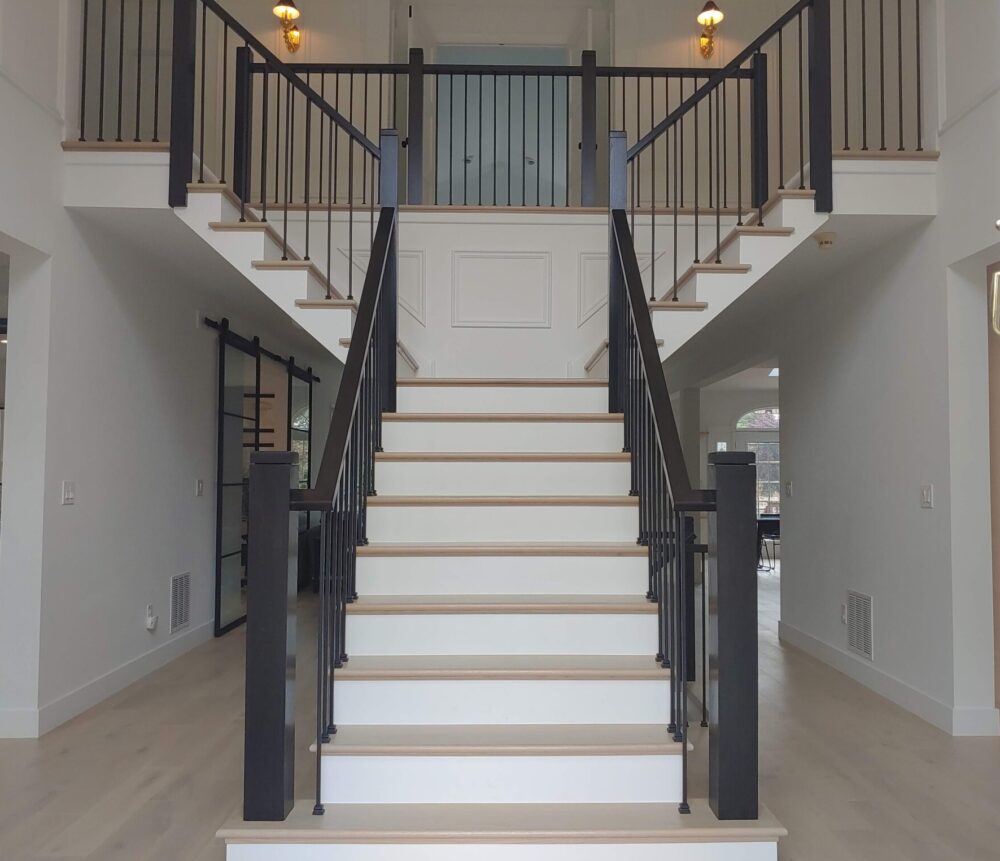 Dipti and Sachin thank their stars all the time that they bought their house right before this crazy market hit. Not only did they buy before, but they renovated it from top to bottom, and moved in 4 weeks before lockdown! Today, Dipti is sharing her roller coaster journey of remodeling her new, dream home. 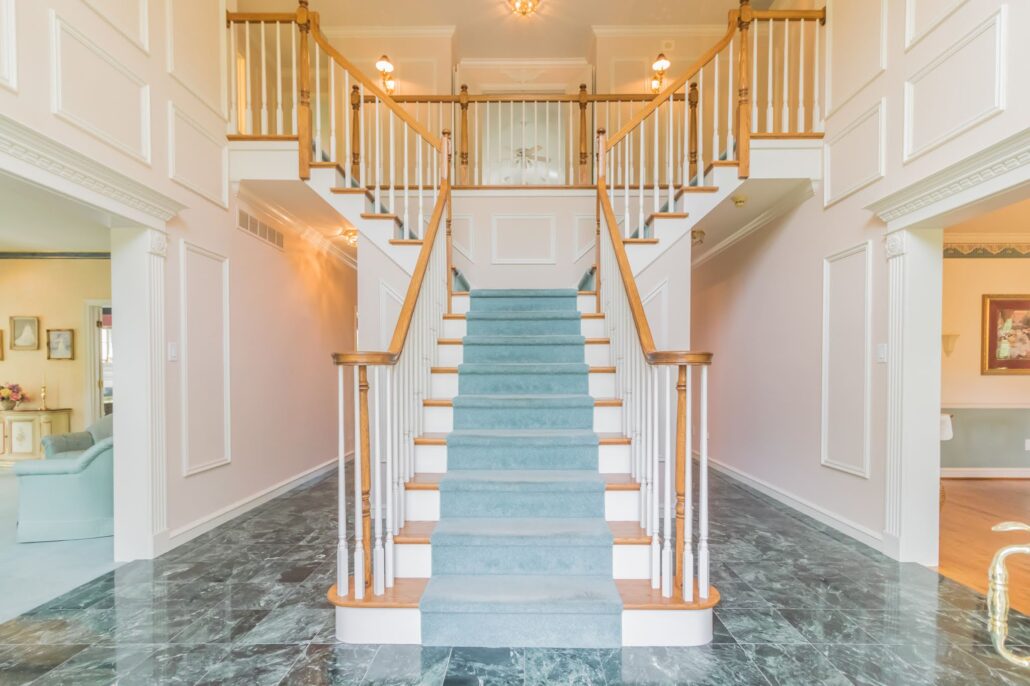 PIN IT!The house was built in 1993 and hadn’t been touched since.  Needless to say, it did not show well.  It was on the market for a while before Nina called Dipti and told her to just take look at it.  While Nina was on FaceTime, Dipti toured the house (without Sachin).  When she first stepped foot in the house, there was something about it that drew her in (it definitely was NOT this imposing staircase – more on that below).  While Nina talked about all the things they could do – knocking a wall down here, creating a hallway there, expanding the kitchen to this size – Dipti felt it in her bones that this was the right house.  She called Sach, who gave her the okay to put an offer in. Within an hour of their offer, the sellers accepted and they were under contract. 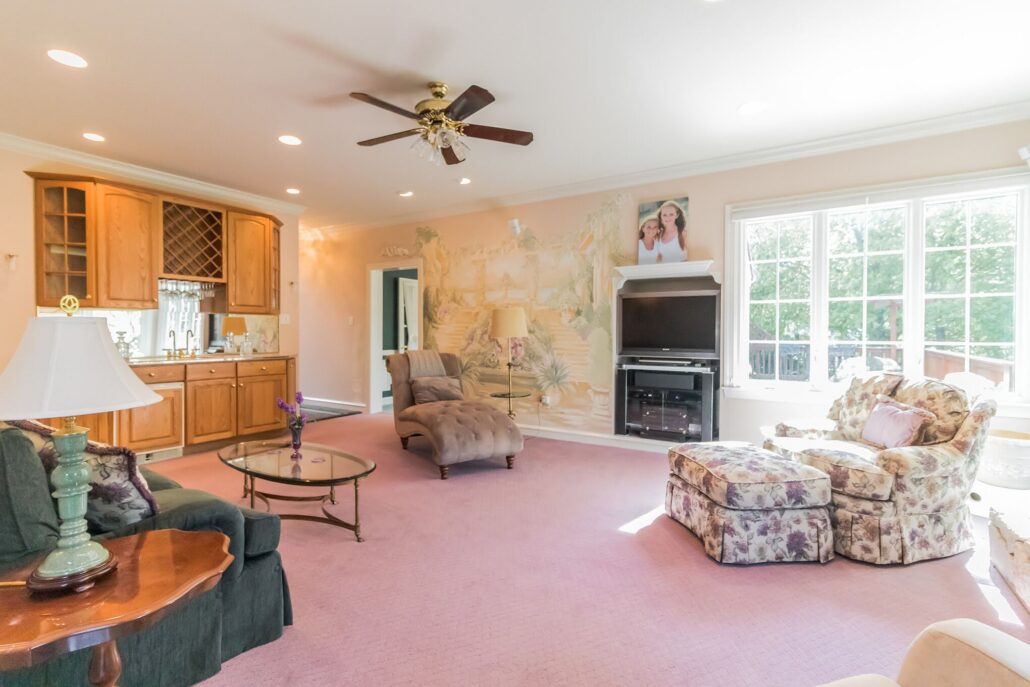 PIN IT!The older couple living there previously had kept the house in pristine condition, so there was not much to do to the bones.  The only big issues were the closed off rooms and the not so pretty staircase when you first entered. And so the remodeling started. They started with knocking down the wall that separated the kitchen from the family room and the walls between the office and “formal living” room. Those two changes opened the house up completely. 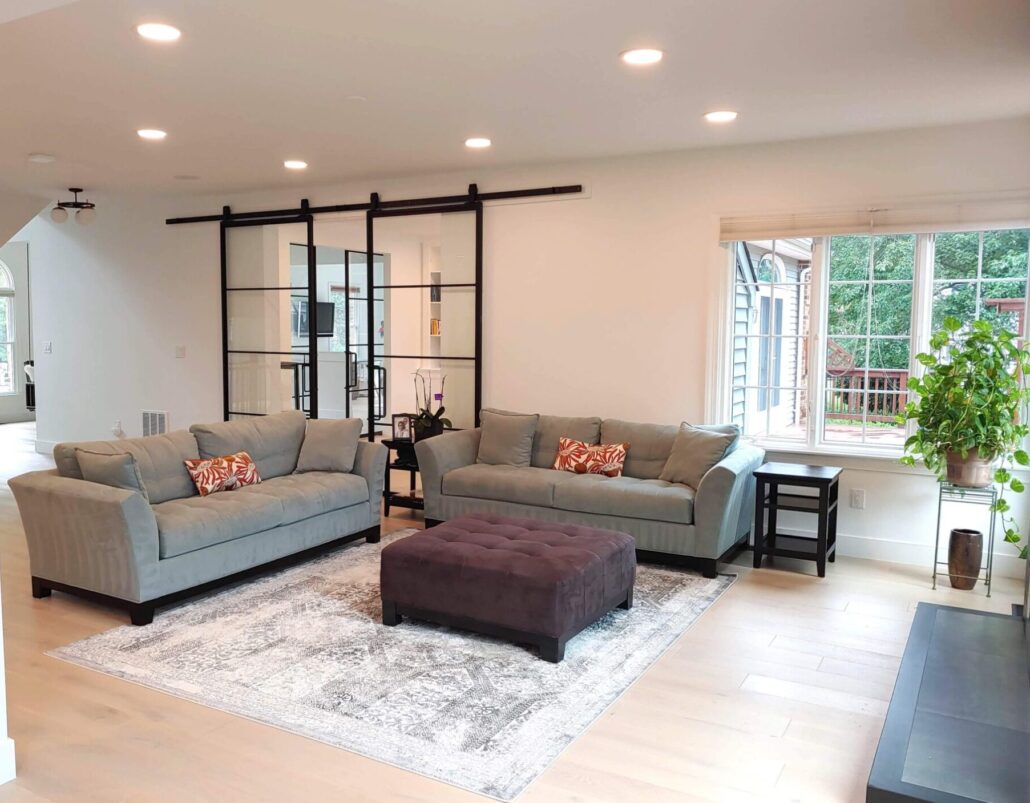 Next they wanted to open the office to have glass walls on both sides, to let in as much light as they could into the house. (Side note: if they knew they’d be working from home indefinitely and would be having a newborn in this house, they definitely would have re-thought this space.) 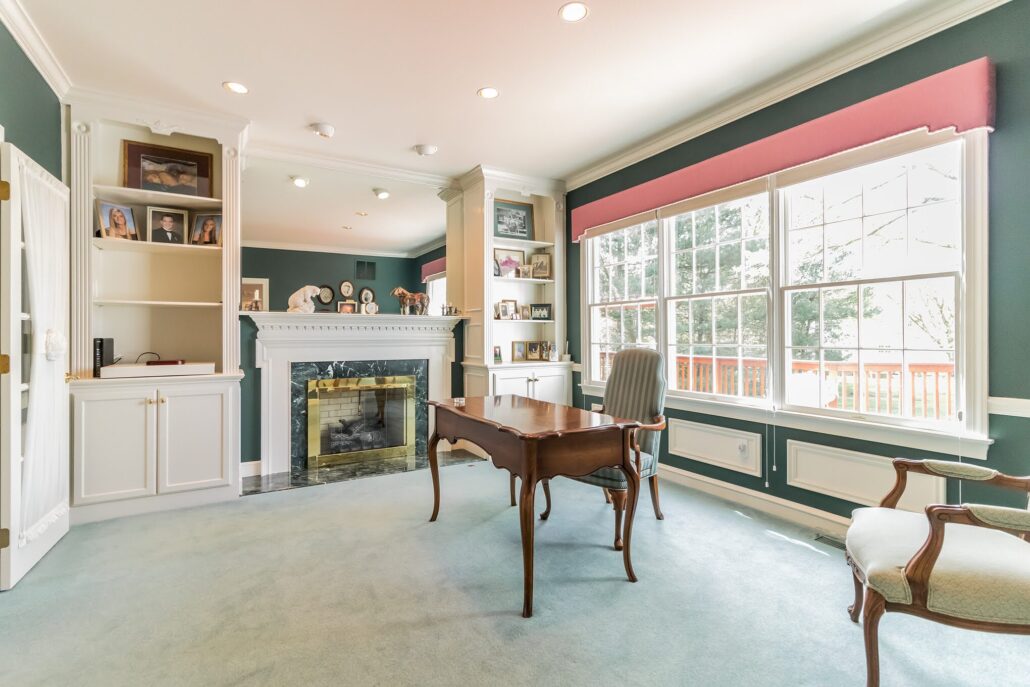 Once Dipti realized how expensive it would be to create completely glass walls, she opted for the cheaper version of installing glass barn doors. She is so incredibly happy with this decision as the doors are gorgeous and a focal point in the home. 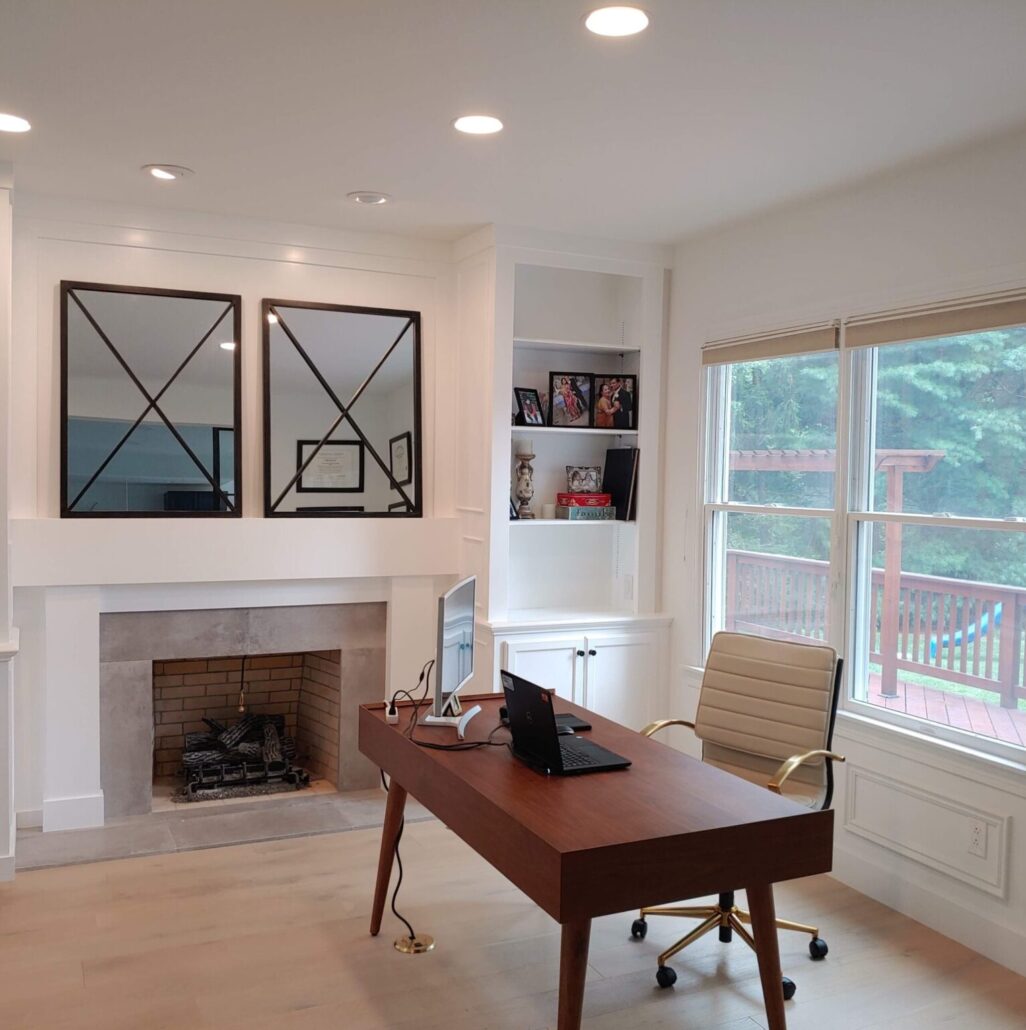 They knew they needed a kids room and by default, the sunroom served that purpose! It’s an enormous space that they’re now able to split in half between baby and boys. Of course, neither stay on their side, but the intent is the same! 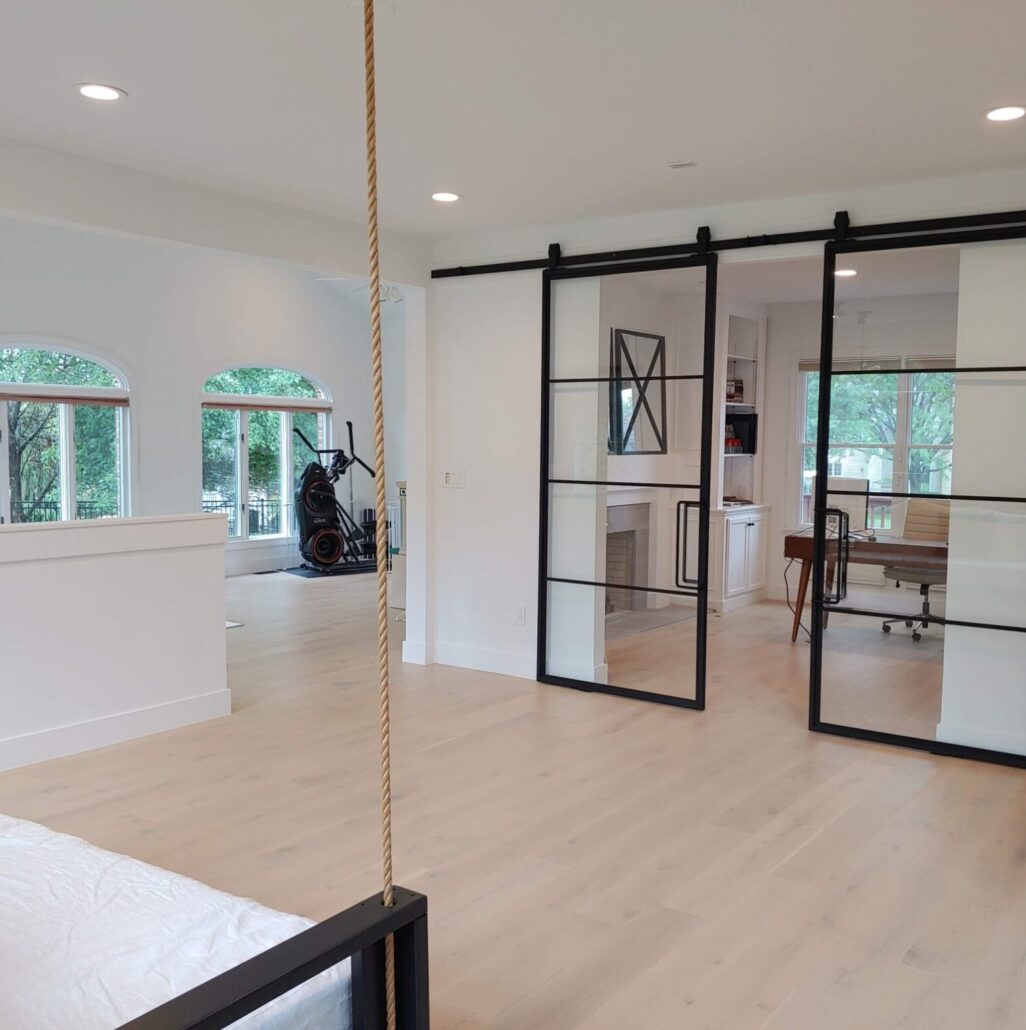 The senior Dedhias came in mid-construction and oh so casually made a huge adjustment to their plans. There was previously a bathroom in the middle of the house that Dipti and Sachin simply planned on updating.  Sheena and Sammy came in and decided that the bathroom made no sense where it was and had the contractor move it into the mudroom, opening the first floor entirely! What a stroke of genius that was!

Leading upstairs, Dipti always hated front entries with stairs right in the front of your face. It was her only complaint about the house.  She went through a million different consults to move them, literally anywhere else, facing any other direction, but nobody was even willing to do the job!  Ultimately she caved and decided to repaint the staircase and call it a day. But once the contractor came in and started taking out the runner, the stairs were no longer viable. So it ended up being an entirely new staircase that he put in (mind you, he also said changing the location or direction of the stairs was an impossible task). But, you know that saying, “everything happens for a reason?” Well, Dipti absolutely LOVES her new staircase – when you walk in through the front door it doesn’t feel imposing at all anymore! It actually is the second thing people comment on (after the barn doors)!

You would think upstairs would be just a facelift. No. Dipti wanted new bathrooms and Nina wanted a new hallway (wait for this one..).  The existing kids’ bathroom was a tragedy. It was tiny, had a closet in the middle, super low counters, no storage, and the tub was green. 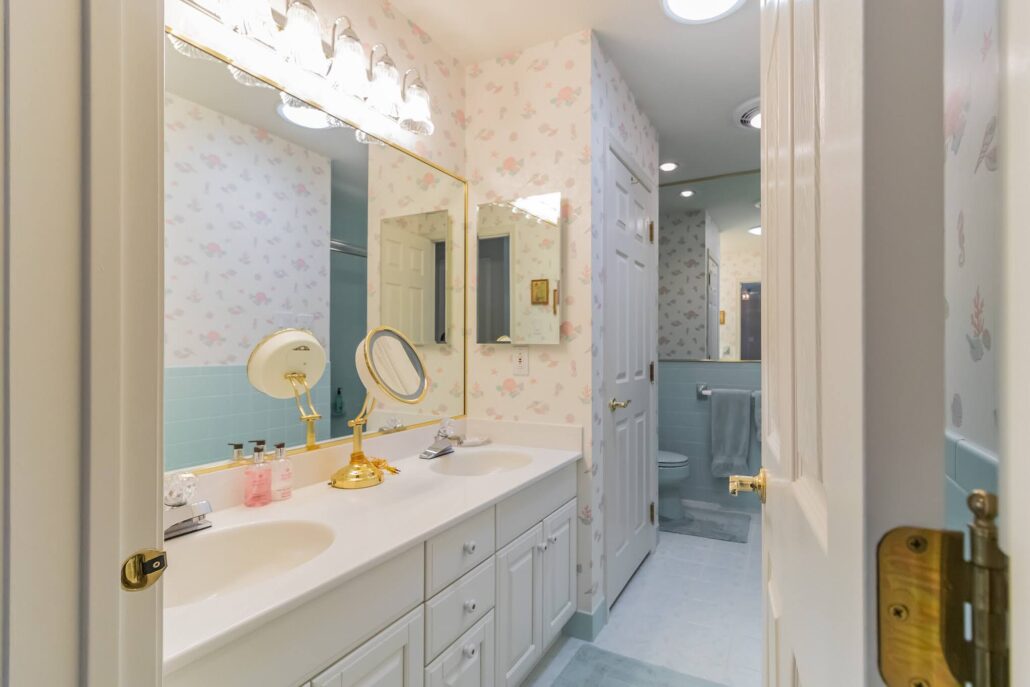 PIN IT!They gutted the entire thing and made it much more functional for their needs. Dipti wanted the bathroom to feel like a kids’ bathroom so she installed this amazing wallpaper that the kids still love to read! 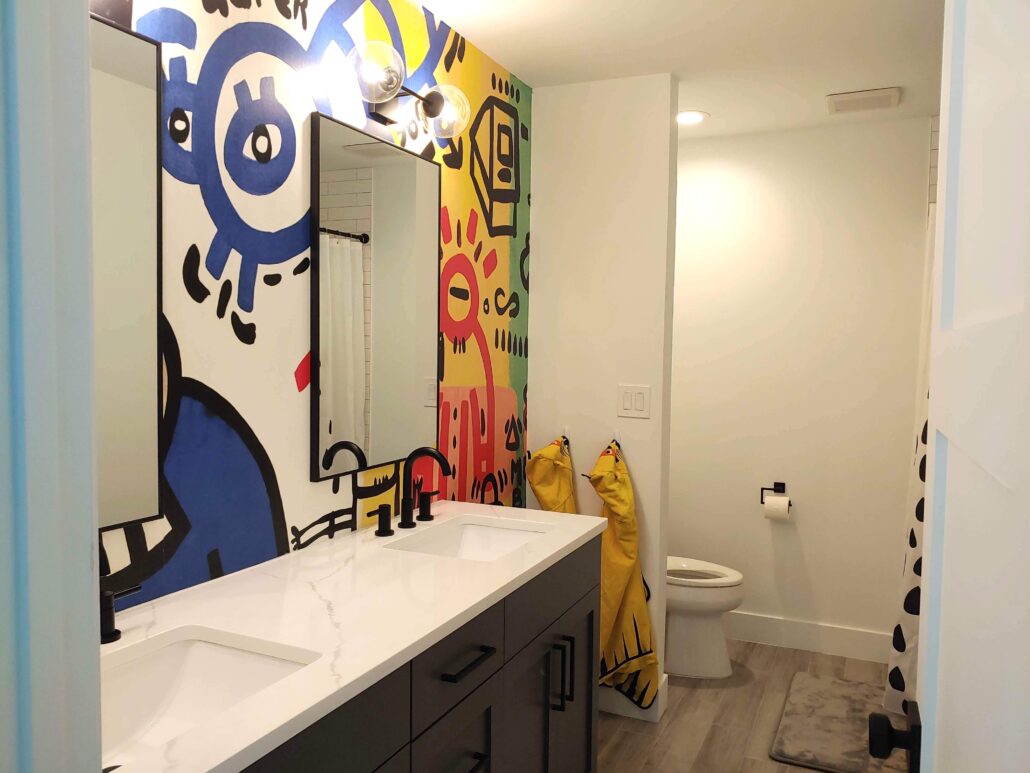 PIN IT!The master bathroom (oh the master bathroom!) was just tiles. Everywhere you looked there were tiles. There was also a weird door that initially they thought led to a closet. But once you opened it, it actually led to an enormous loft area that was bursting with tons of light! 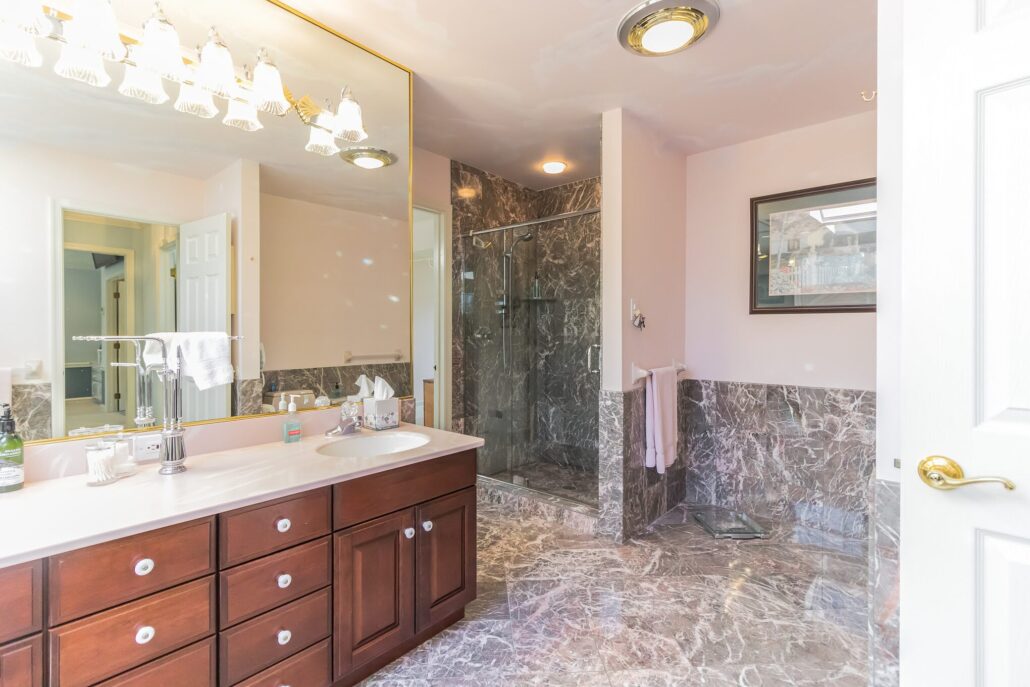 PIN IT!The master bath was a complete gut job. New floors, new shower, new sinks, everything new!! They also closed off the door and made it a room of its own. 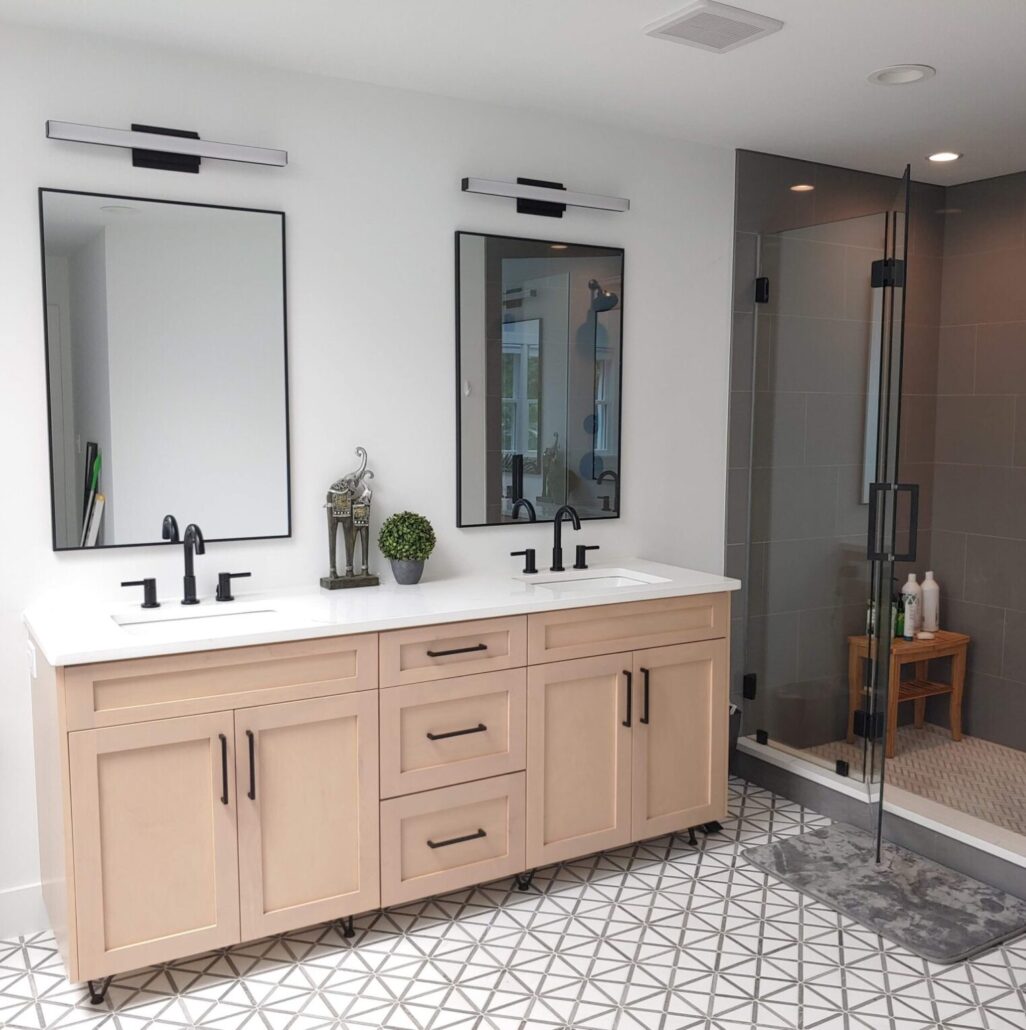 Then, by taking some space from the master bathroom and guest bedroom, Nina had the brightest idea to create a hallway from the stairs to the loft. The space is now open for use by anyone and is actually being used as one of their home offices! They also moved the laundry, which was originally in the mudroom, to the loft!

The rest of upstairs just got a paint job and new carpet. Thank goodness, because the three of us could have gone on forever making a million changes to this house! But the final product was everything Dipti wanted!

The best part, of course, was the KITCHEN! Head to our Instagram for some before and after pictures of the kitchen and more spaces in the house!

We hope you enjoyed this home renovation journey!

Must Have Off the Shoulder Blouse