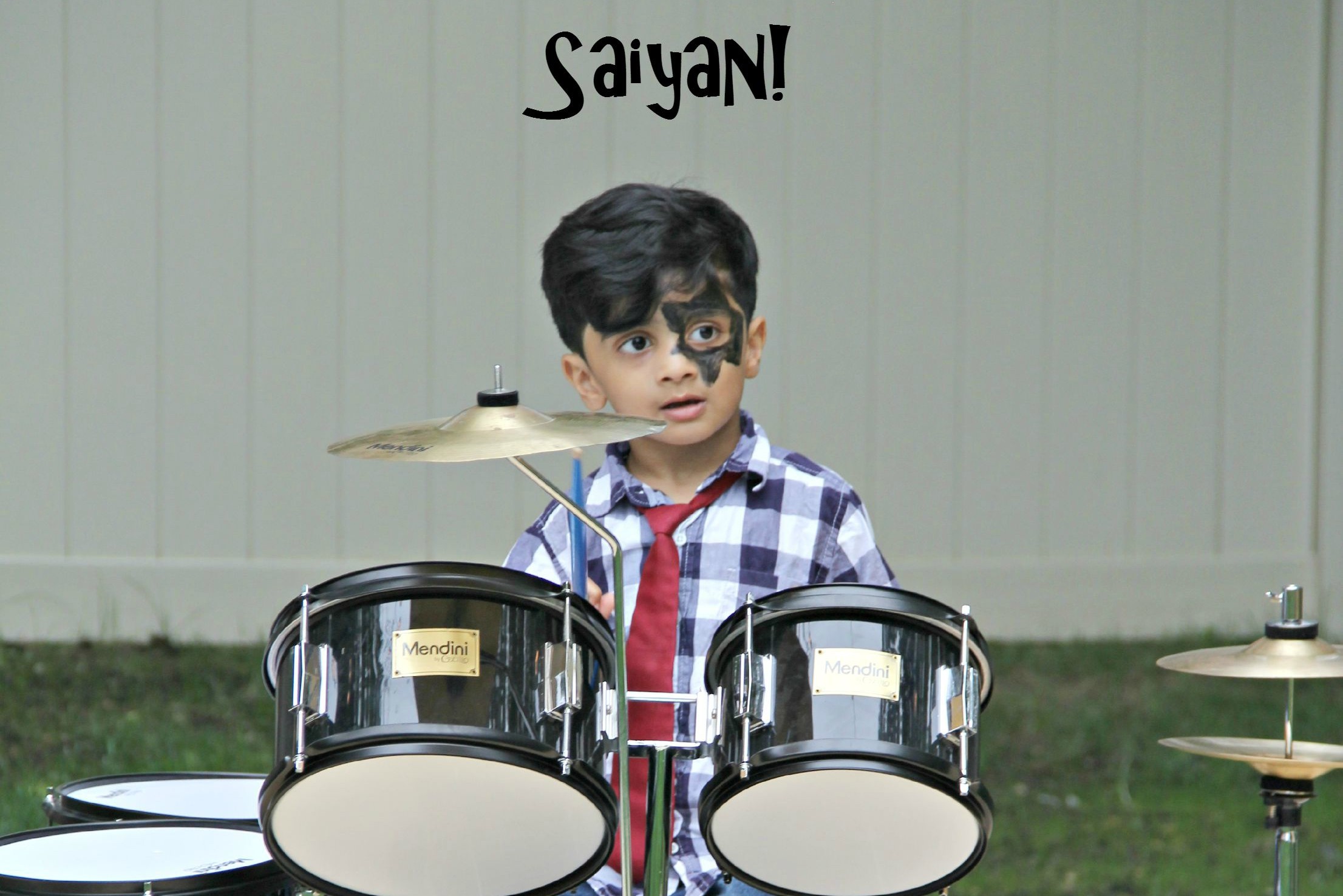 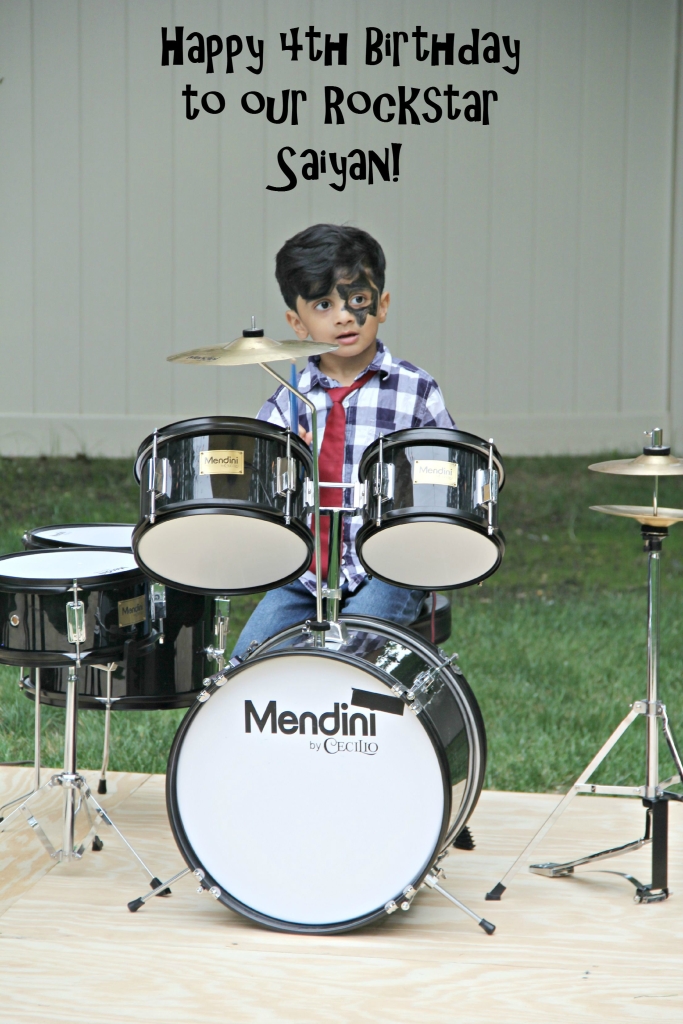 Last month we celebrated our rock star, Saiyan’s 4th Birthday! He is currently obsessed with everything music and instruments, so what better way to ring in his 4th than this wonderful theme. As you all know, when it comes to DIY events, Sheena can get a little carried away. And that is exactly what happened for this party. At first it started off with inviting a few of his school friends over to play with all his instruments and pizza/cake. Then Pinterest happened! Sheena logged on for a few ideas to make the party a little more interactive for the kids. One thing let to another, and she had talked Sammy into a full blown, backyard concert series for Saiyan and 30 of his friends (plus their parents)…yikes! Of course, Sammy never says no to Sheena, so after some yelling and arguing, she got to throw her baby boy one big party! It all started off with her DIY invitations to all of his buddies! 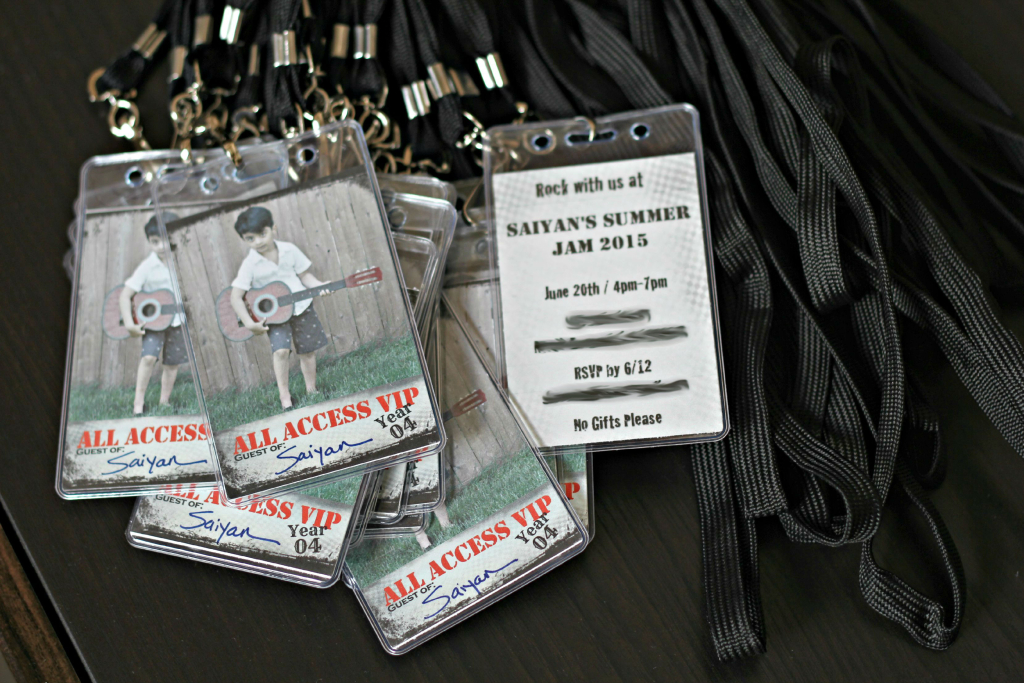 Of course nothing is easy when it comes to Sheena’s planning. She wanted to rent a stage area for the kids to perform “concerts.” Unfortunately it was graduation season so there were no available stages for rent! Sheena lucked out with her amazing family who lent her some wooden palates and she enlisted their landscaper to build her this stage from scratch. Sheena strung some lights on the top to make Saiyan’s stage complete. She set up the drum set, the guitars, keyboard, speakers, microphones, amplifier and iPod for the kids to enjoy. 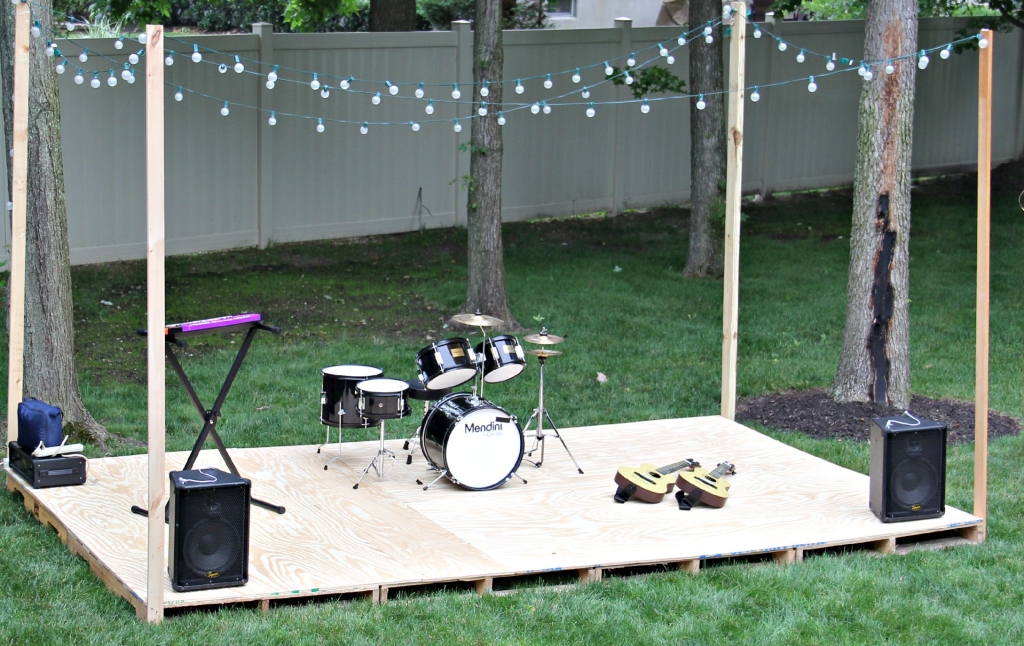 The kids were loving the theme and got dressed for it too! She put the boys in rock band clothing – though of course they had their own requirements (Shailin “needed” a button down shirt, Shaan “needed” suspenders, and Saiyan “needed” his tie – remember when they were 5 months old and wore onesies??? We miss those days)! 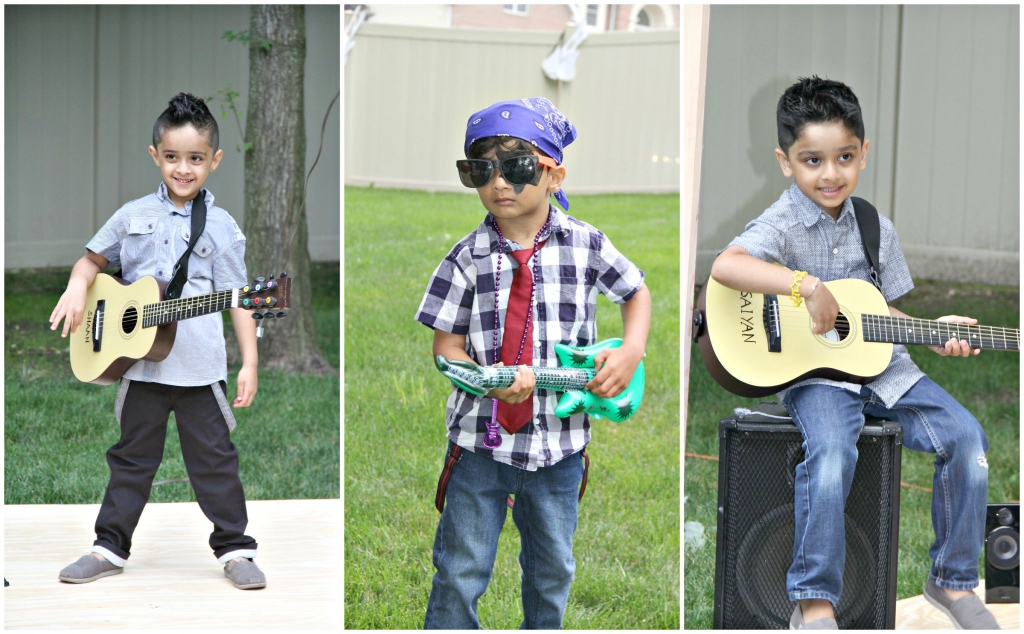 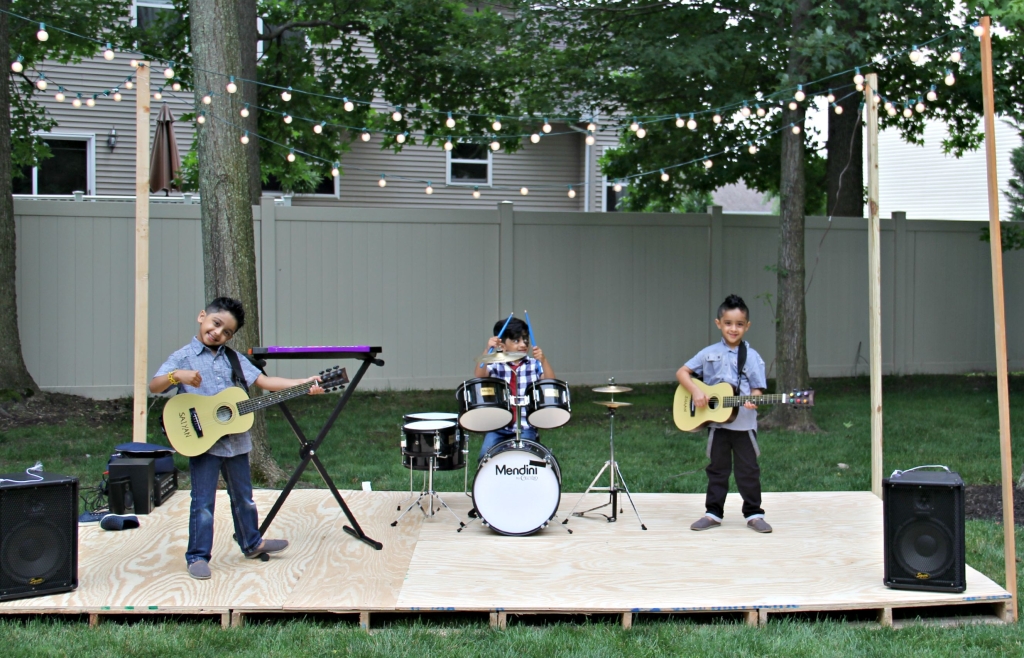 On the day of the party it was supposed to rain so all the intricate decor stayed inside! Sheena’s amazing friend wanted to gift Saiyan his decoration for the party and she did great! Check out some of the pictures below of her creations! She hand made the “Happy Birthday Saiyan” banner using her hand Silhouette Cameo paper cutter. With that she also created all the small signs for the “dessert table.” 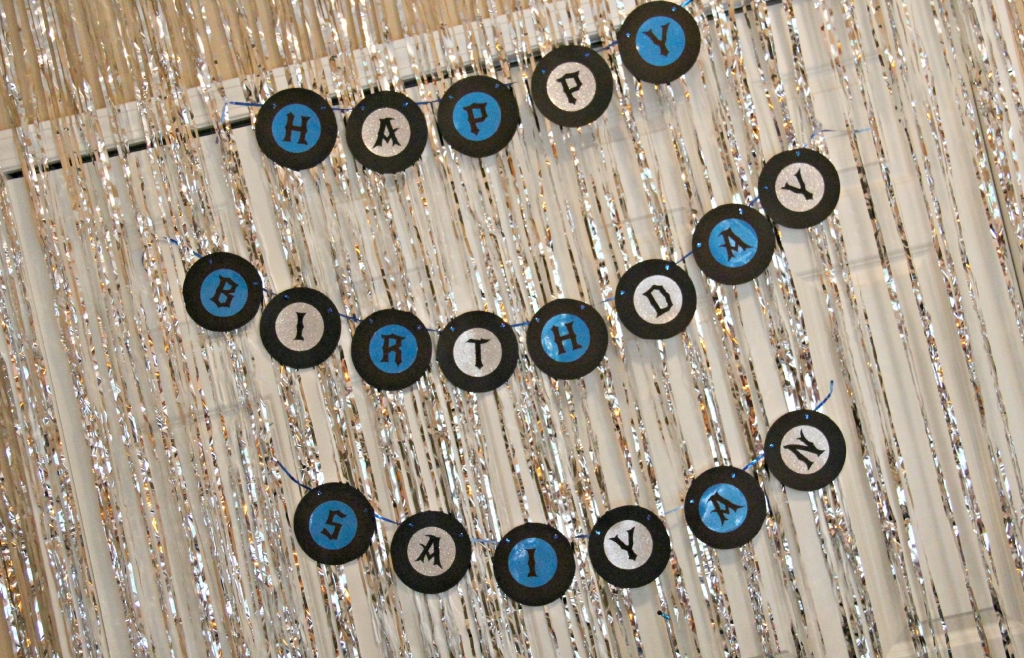 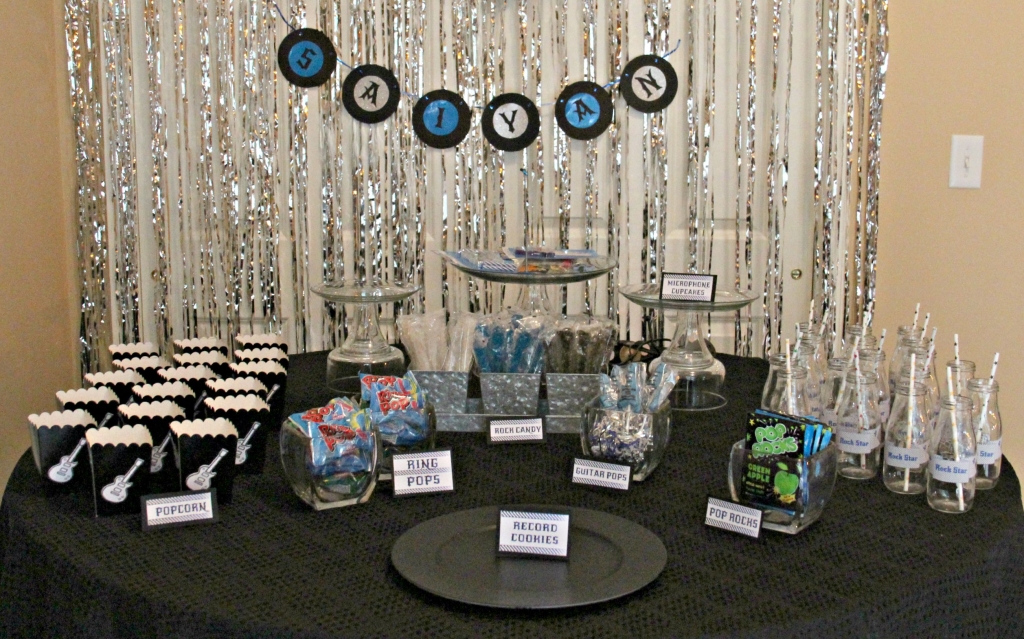 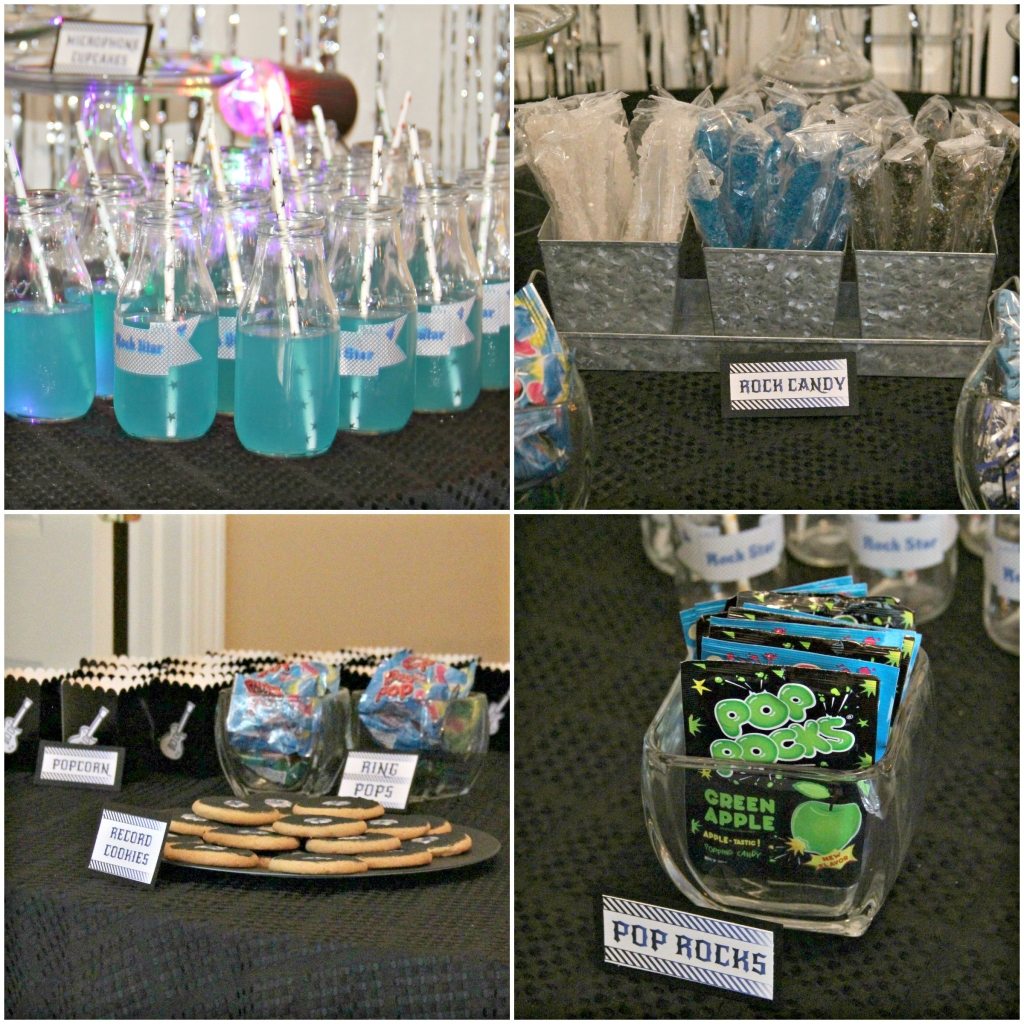 For the kids who weren’t “performing” on stage, Sheena bought inflatable guitars, microphones and a radio for them to jam along with (although most kids ended up sword fighting with them….). For the arts and crafts portion of the party, she purchased paper guitars for the kids to color and decorate with stickers and such. Of course no kiddy party is complete without face painting and tattoos in the rock band theme! 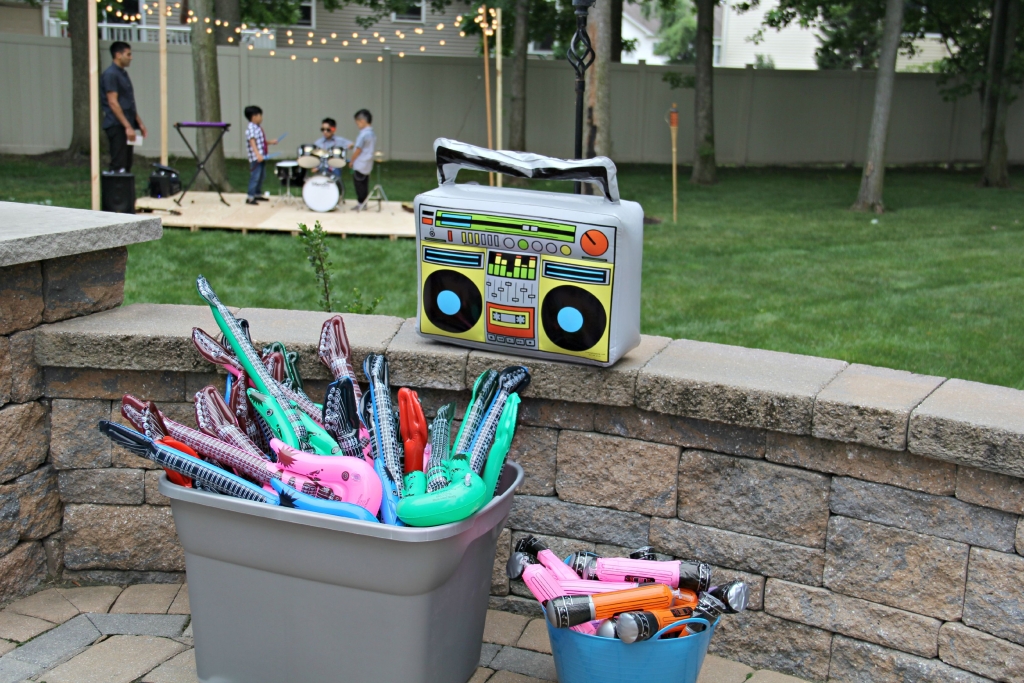 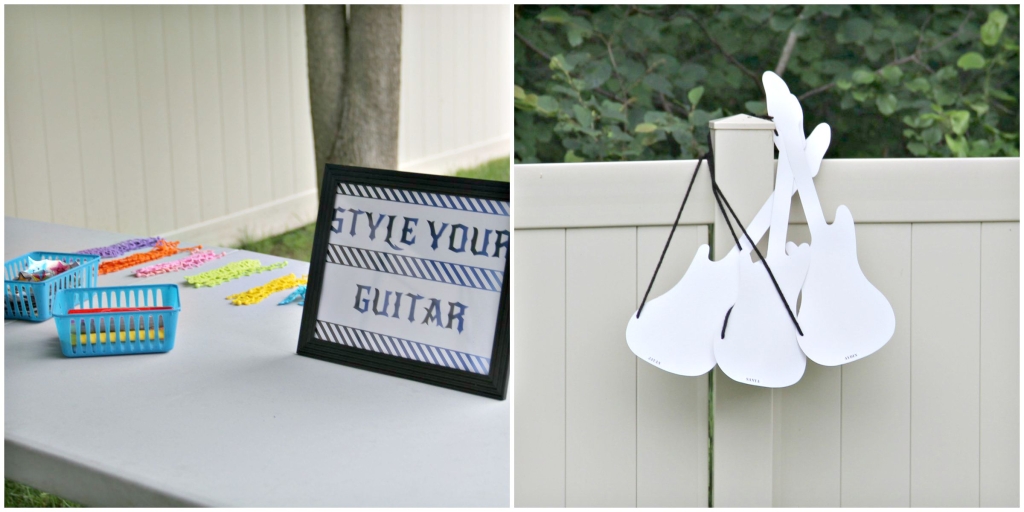 The kids also had a “dress up” area, where they got to throw on some rockstar glasses, a bandana, chains, etc to take pictures it. Since we are obsessed with capturing everything on camera, those pictures were definitely a highlight!

The microphone cupcakes were another gift from our bhabhi – aren’t they amazing?! She baked the cupcakes and used icing to “glue” them into ice cream cones, and then frosted the tops and added silver edible sprinkles! So awesome! 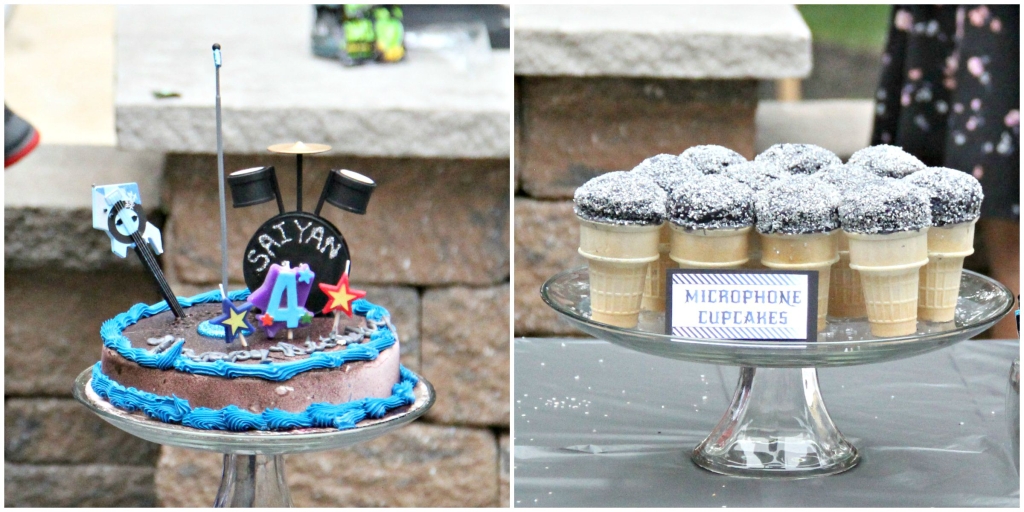 For favors, Sheena loves giving the kids gifts that they will be able to use. For the 4 and over kids, she chose headphones that they can either use when traveling or for some even in school. For the 4 and under group, she got them a few musical instruments (flute, echo microphones and a tambourine). Sheena’s friend also made these super cool record labels for each of the favor bags with her silhouette to personalize the favors!

All in all it turned out to be a fabulous party and all the hard work payed off when we saw all the kids having a blast!

A New Year, A New Chapter, A New Blog

Behind the Scenes Part XVIII