The funny thing about sports and the three of us is that it is a total love/hate relationship! We love watching when our favorite teams are on top, we love watching our kids play on teams and cheering them on, and we love that there is such a variety of sports to choose from to either play or watch. However, we hate when we lose the attention of our husbands and kids to sports, we hate all the equipment we have to lug around/store for the kids to play every season and we hate all the driving around town we have to do for it. Nonetheless, the camaraderie it brings, the character is builds and the level of commitment it teaches are definitely the benefits to sports that we can’t deny. The more we dive into the world of sports with our families, the more we are learning to appreciate and understand the love for it.

This topic must seem out of left field (fun pun), but football season has come to an end and it is bittersweet. It was such an exhilarating few months for most of us and we wanted to share the ride. Growing up, the three of us were never really into sports of any kind (playing or watching), as we took an interest in Indian dance, so this new found love that comes from our marriages has definitely enlightened each of us. 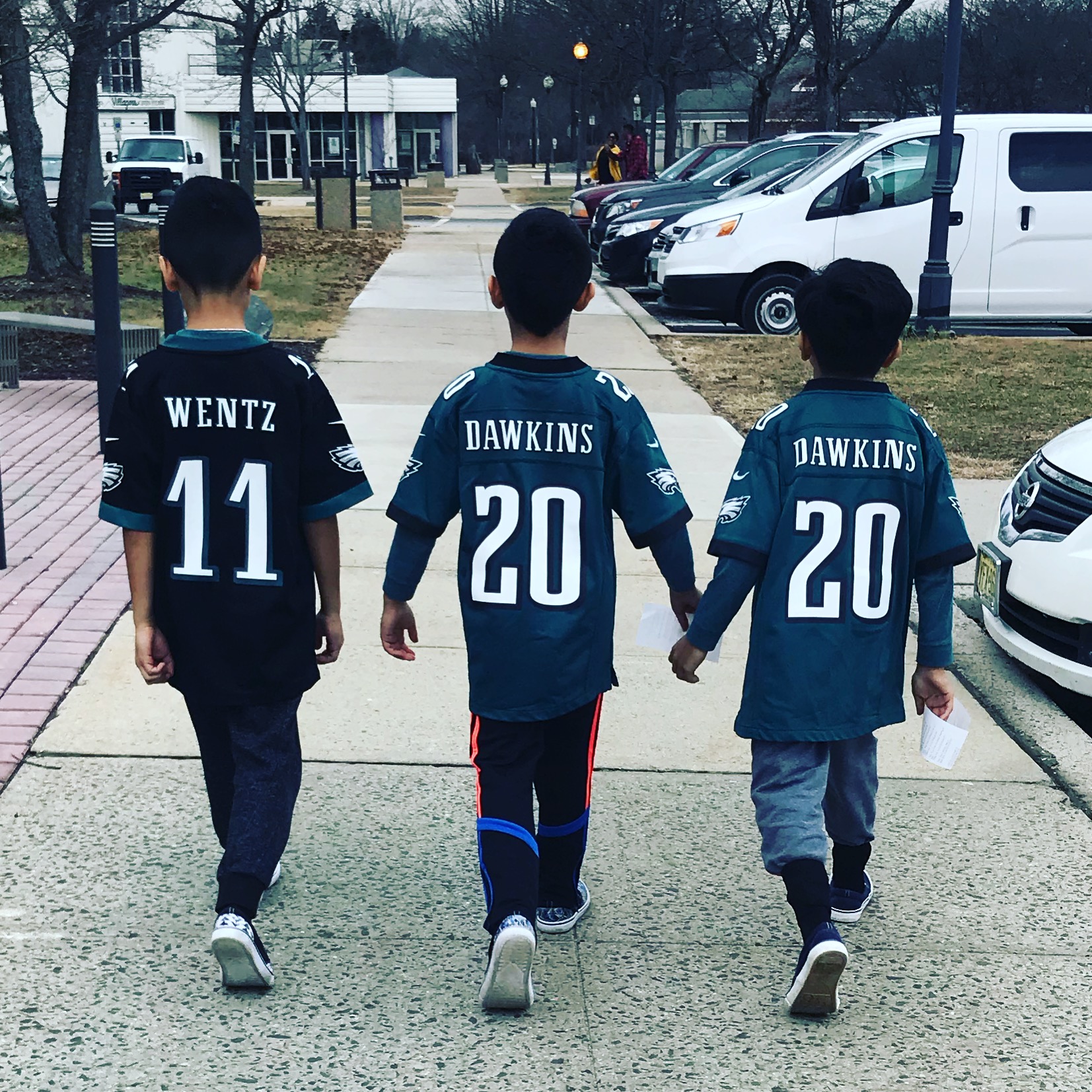 Sheena got into watching sports (especially football) when she met Samir. Eventually, she married into the Eagles family and never looked back. Samir is 8000% more into it than she is, but this season sparked something that she never really felt before for so many reasons (mainly because the team did amazing and won the Superbowl). The past few years since the boys have been old enough to start playing sports, she has found herself loving sports because her kids and husband do so much. Samir grew up playing sports, so he has always had a love for them. His dad is also very much into it, so that just bled into him and Sachin. He is almost always a part of the coaching team for any sports they choose to play, which shows Sheena how much he loves the game and how much he wants his boys to learn the game. The feeling of that makes her love of the game grow each time. Samir has grown up watching football and he knows everything and anything about it and if he doesn’t, he will learn it. His interest for the sport trickles down onto their boys as well. The way they watch daddy analyze the games, call the plays, know the players, cheer for wins and cry for losses, has built their boys to be just as enthusiastic and emotional about the game. This year, specifically with football, Sheena has been blown away with by how much he enjoyed teaching all three of their boys about the specifics of the game and what it means to be a Philadelphia Eagles fan. He has taught them the ride or die loyalty he shares with the team and what is means to be a true fan. At first, Sheena didn’t understand it, but after this win and watching how Samir felt about it, it showed her that patience is a virtue and she wants her boys to learn that as well. As of now, the boys are into playing soccer and baseball but she wants them to also experience all types of sports like golf, tennis, basketball and even football.

Nina, having three girls, has a different story. As you know, the three of us never played sports growing up. Nina and Neal definitely want the girls to each find a sport they love. They want them to be well rounded individuals and learn the dynamics of team sports as well as individual sports.  Neal played varsity tennis through high school and makes every attempt at getting them to learn one skill at a time. The issue she runs into is that Naya and Niva (Nesa is still too young) like different sports. She wants them to love what they are playing, but she isn’t in that stage of life where she can do multiple drop offs and pick ups and coordinate multiple games and practices. So for now, she is sticking to exposure for them and down the line, let them lean into whichever sports they are fond of. So for now they are both playing soccer and doing gymnastics. The last two years or so, Neal has gotten the girls to also like football and enjoy wearing their team jerseys. They sure have a million questions and always think the Giants are playing, but he likes sharing that time with them. Nina hopes that by exposing them to different sports, both on TV and in life, they will each eventually land on one that makes them happy and that they want to be great at! 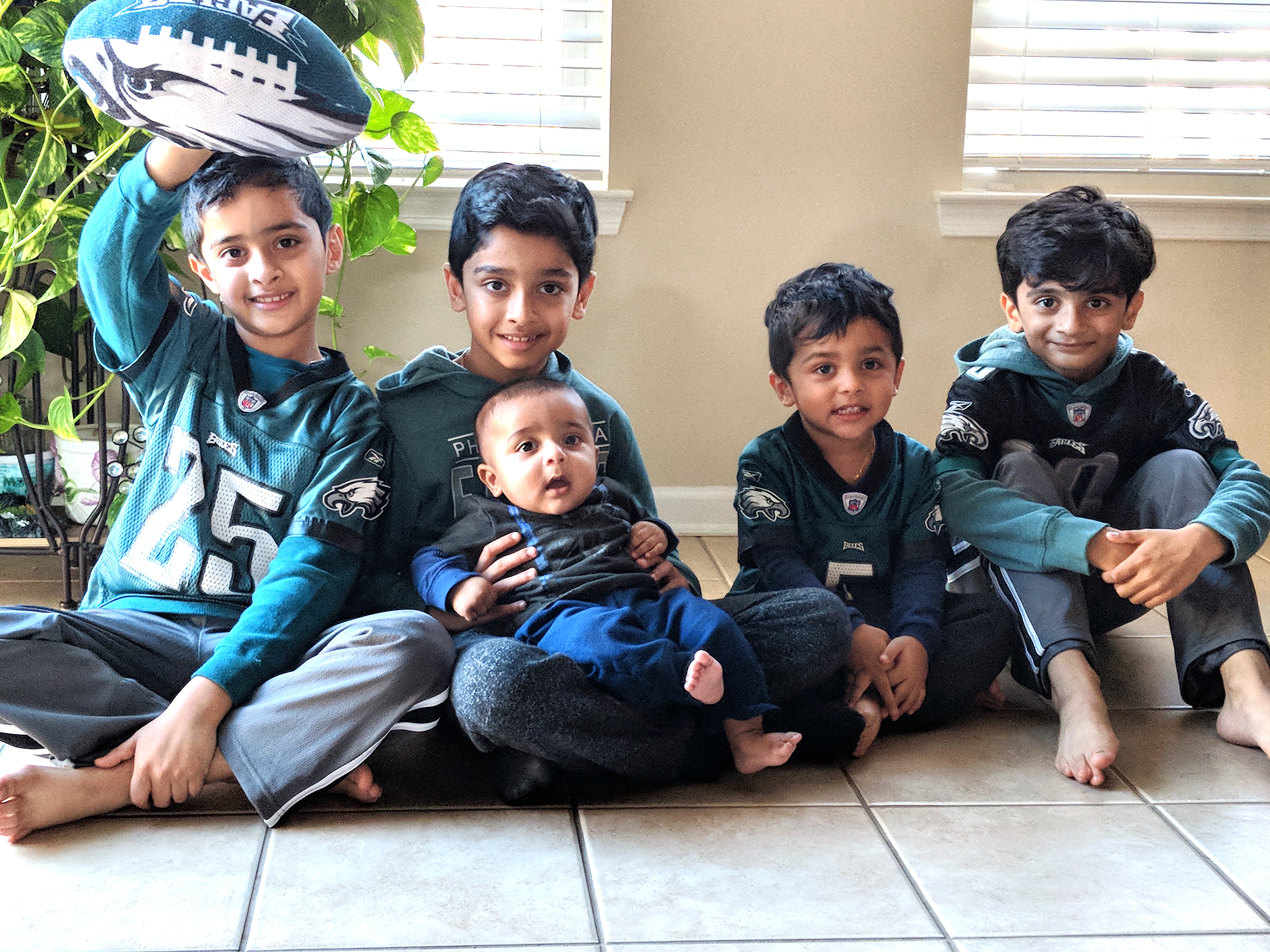 Diav is a born and bread Philly fan just like his daddy. Dipti has a similar story to Sheena because she ended up with the other Dedhia brother. Sachin, like Samir (if not, more than Samir) is a die hard Philly sports fan. He is actually more knowledgeable and more dramatic with all the games than Samir. He also grew up playing, analyzing and loving sports, so his love pours into their boys. While Dipti and Sachin were dating he used to take her to multiple Sixers games and they’d watch Eagles games together all the time – so Dipti definitely knew what she was getting herself into. After getting married, to Dipti’s surprise, she actually got super attached to his teams too, especially the Eagles. Sachin has taught her and Diav all he knows about football which has actually made the family closer – every Sunday they all get in their gear and cheer together, cry together, stress together, and celebrate together. Sure Diav doesn’t have the attention span to get through the whole game, and like the girls, every football player is an Eagles player, but seeing him watch his daddy jump around the room and imitate his excitement is enough of a reason to encourage sports in her family. Dipti wants Diav and Kallan to remain excited about all the sports their dad loves, so once they are older, she plans to put them into sports as well so they can experience them first hand.

There are so many life lessons to be learned in both playing and watching sports for our kids and we want to make sure they keep this aspect in their lives forever. By them asking questions and educating themselves on the sports, they are unlocking their own interests that they maybe didn’t know they had. Plus, the time we get to spend doing something we all love is priceless. It teaches them the importance of teamwork and how the success of a team lies in their ability to work together and depend on each other to achieve a common goal. It teaches them how to lose gracefully. We coddle our kids so much these days and make them feel so entitled, so when they see teams (especially their favorite teams) lose, it makes them understand that it is all part of the game and ultimately a part of life – you win some you lose some but you always come out stronger. It shows them the true meaning of sportsmanship when they see or actually do congratulate a winning team and learn that they will be able to try again next time.
Comments 0
Share This Post
Comments 0
Previous Post Next Post

A Little Bit About Nina

Behind the Scenes Part V