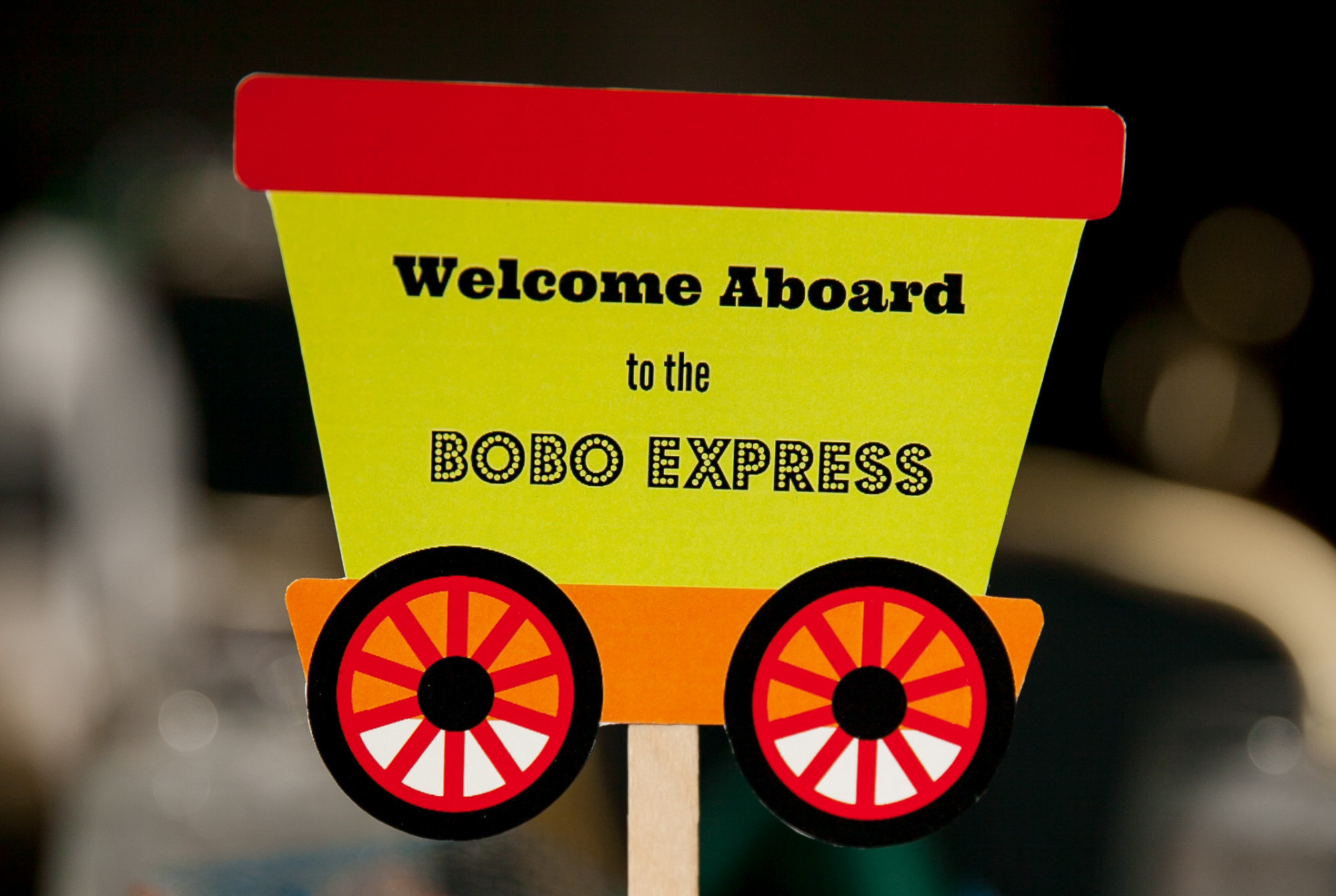 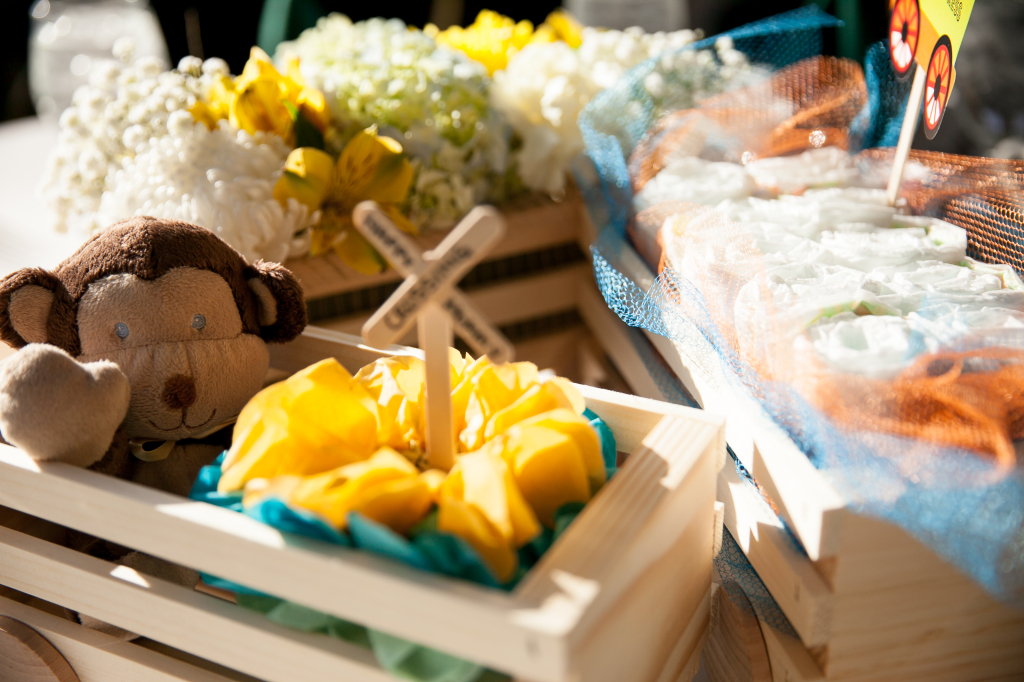 We have shared a lot of details from Dipti & Sachin’s baby shower that took place this past December. From the invitations to the fashion to some behind the scenes. We thoroughly enjoyed every moment of the shower and just can’t stop sharing it with you. Another huge part of the shower was the decor. We actually did it all by ourselves and are very proud of it. With Sheena’s DIY brain hard at work, we created three amazing and unique centerpieces and a fun table game amongst others. We had 24 tables, so we ended up making 8 of each centerpiece for all the tables. Below are the details of each centerpiece in their making.

The idea with the first centerpiece was to create a choo-choo train on the table with fun fillings. We created a series of three trains per centerpiece and positioned them into a triangle. For the trains, we bought wooden crates and hot glued on wooden circle disks to create the trains.

For the first train, we lined the bottom of the train with burlap. We chose a soft and pretty arrangement of flowers that featured large hydrangeas and filled the space with other smaller flowers. We bought the flowers from a local florist and arranged them into the trains the morning of to assure a fresh look. 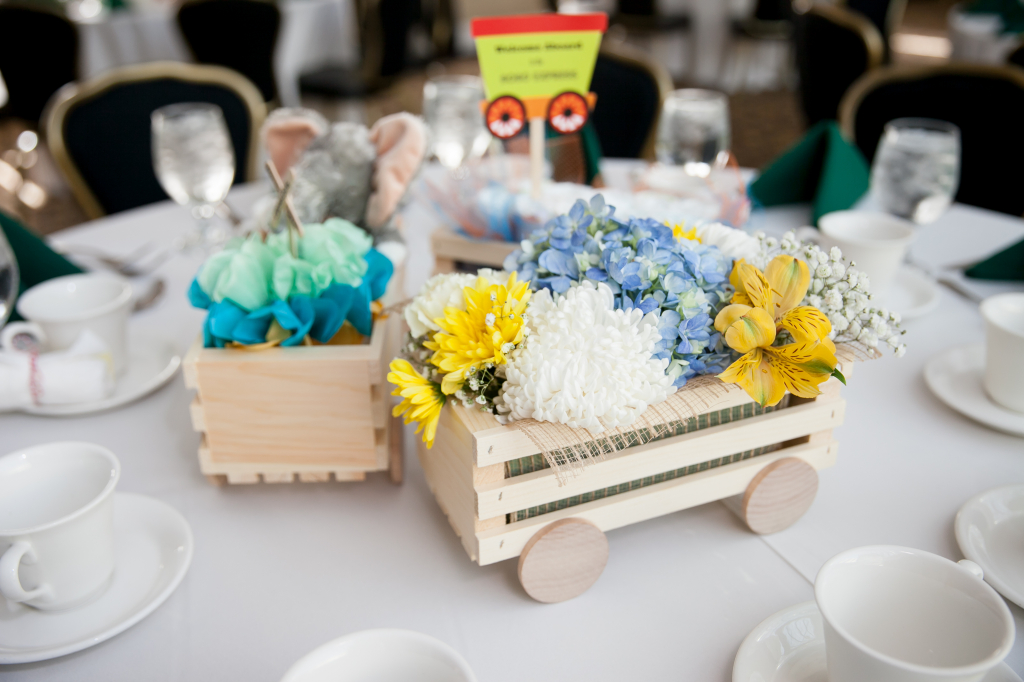 For the second train, we made a large paper flower out of colored tissue paper (used this tutorial) and added a popsicle stick to the middle with a train sign. Each train sign had a different train station on Bobo’s train. Next to each paper flower, we placed a different stuffed animal in for the ride!

For the third train, we lined the bottom of the train with orange and blue burlap. We rolled 10 newborn diapers into small rolls and placed them into the train. We created cut out train signs and stuck them onto long wooden sticks and placed one sign in this train. This sign read, “Welcome Aboard the Bobo Express.” 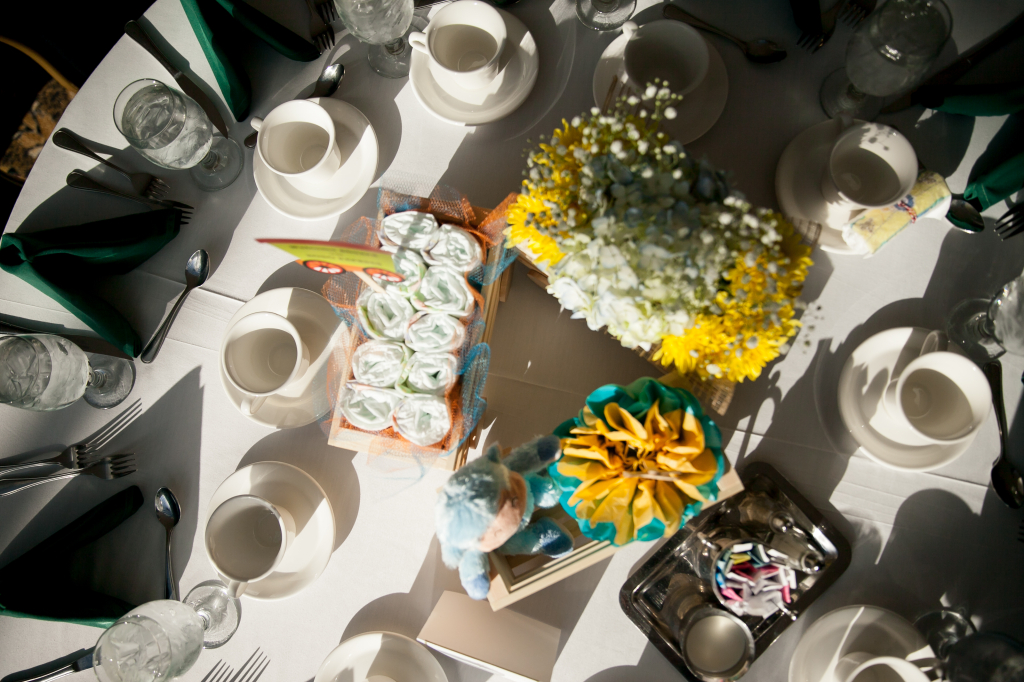 For the second centerpiece, we purchased these large red buckets from Michaels and glued a fancy ribbon to the middle of the bucket on the outside. We also bought black, round sofa sliders and stuck them to the bottom of the bucket on the outside as the train wheels. Inside the bucket, we lined it with blue and yellow burlap and placed a large piece of floral foam inside. We covered the foam with multi color shredded paper filling it till the top of the bucket. We printed and cut out different train signs and glued them onto a wooden stick (be sure to make the signs double sided). We inserted the signs into the floral foam to finish the bucket portion. 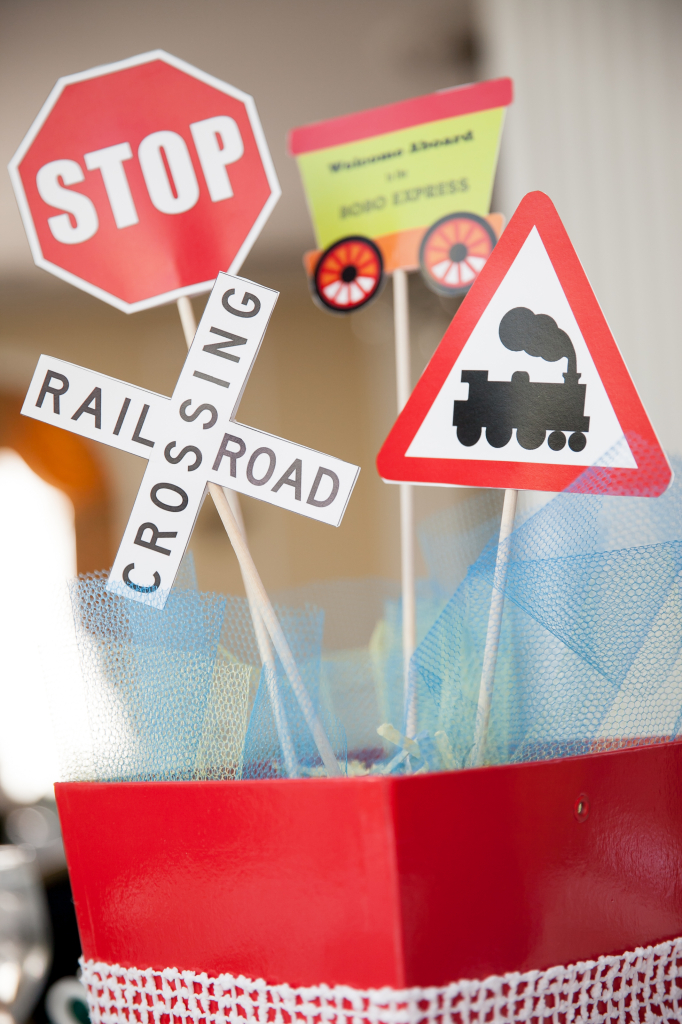 And to finish the look, we bought train tracks and trains and placed them in a circle around the bucket and placed the trains on the track. 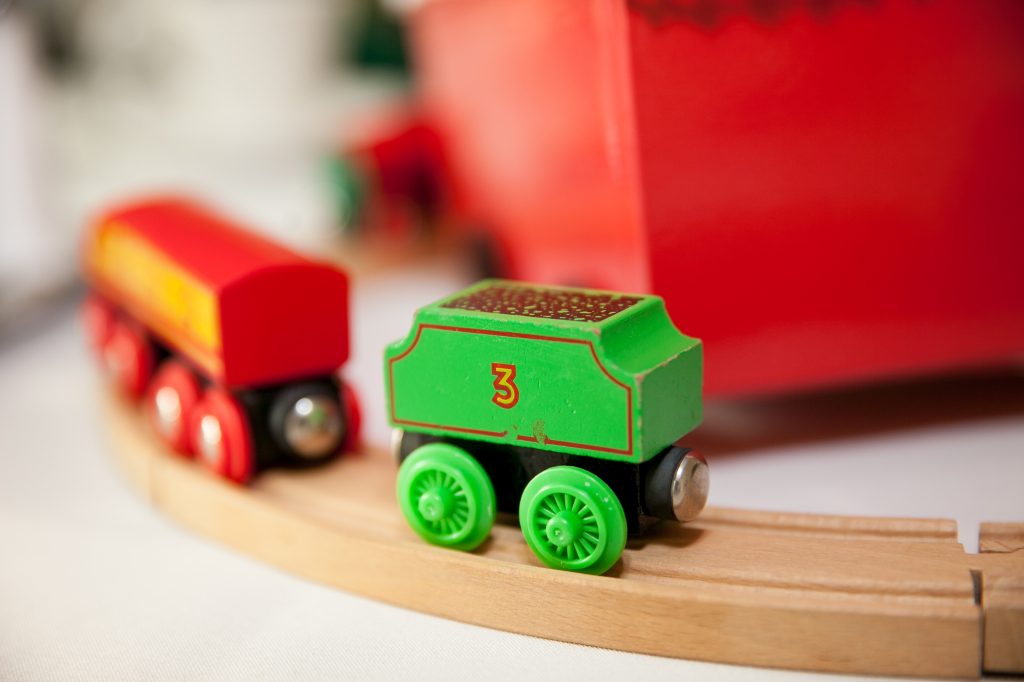 For the third centerpiece, we bought these circle pre-cut train tracks that are 12 inches in diameter.  We placed two tracks per centerpiece and overlapped them. We placed small toy trains randomly along the tracks. In the center of each circle track, we placed this train vase with an over-sized hydrangea in the middle. The vases were made with white styrofoam circle disks. We cut out the same trains we used on the babyshower invitation card and glued them along the profile of the disk. 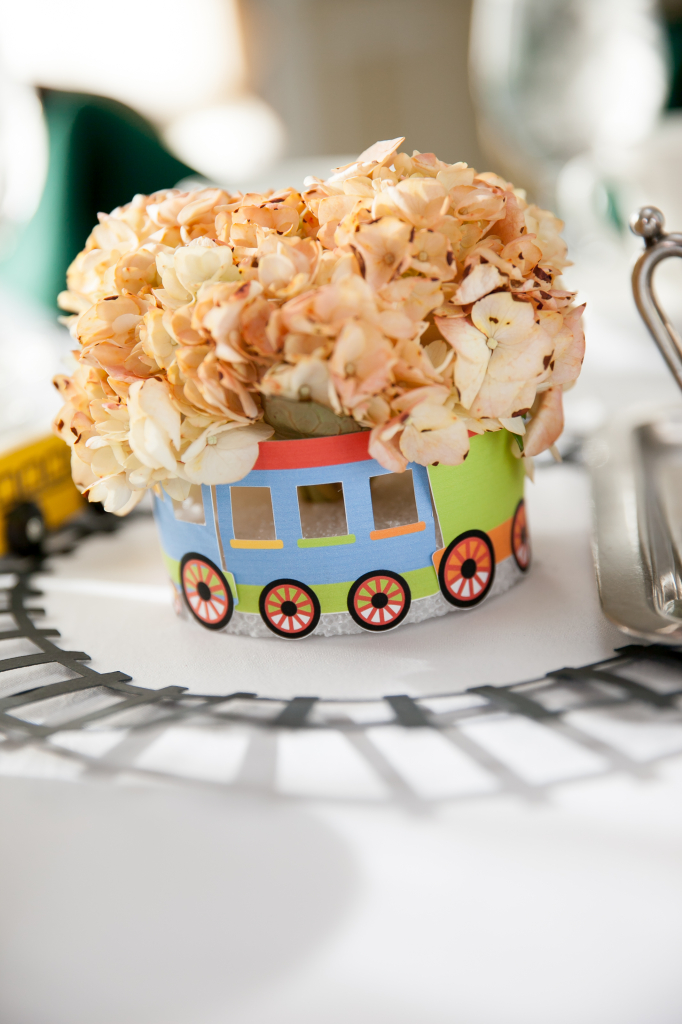 For the cocktail tables, we bought these small wooden trains/trucks from A.C. Moore and painted the wheels different colors. We scattered these around the shower; on the food table, bar, cake, etc. to keep in the theme. They actually ended up being great for the kids to play with once they lost interest in being at the party! Sheena’s kids especially! 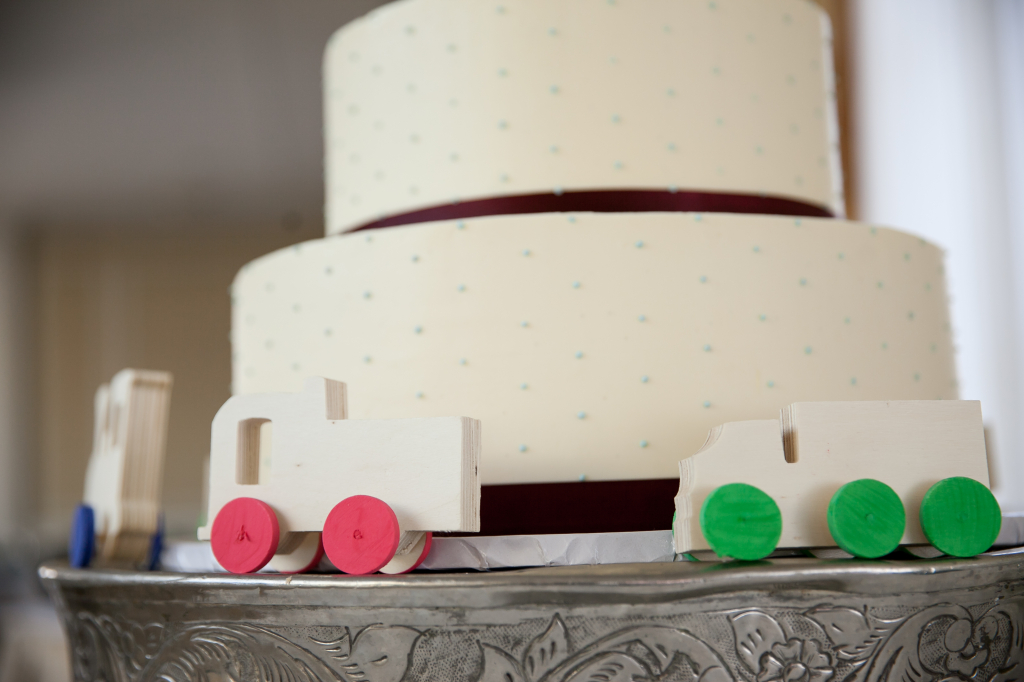 For one of the table games at the shower, we created a series of numbered questions that guests had to answer. The guest with the most right answers, won. We ended up using extra floral foam we had and drew large circles to create a choo-choo train effect. We bound each train to the next with a toothpick. Each train had a quote from when Dipti and Sachin were babies and the guests had to guess who the quote was about. We placed note cards with the numbers for our guests to fill out. 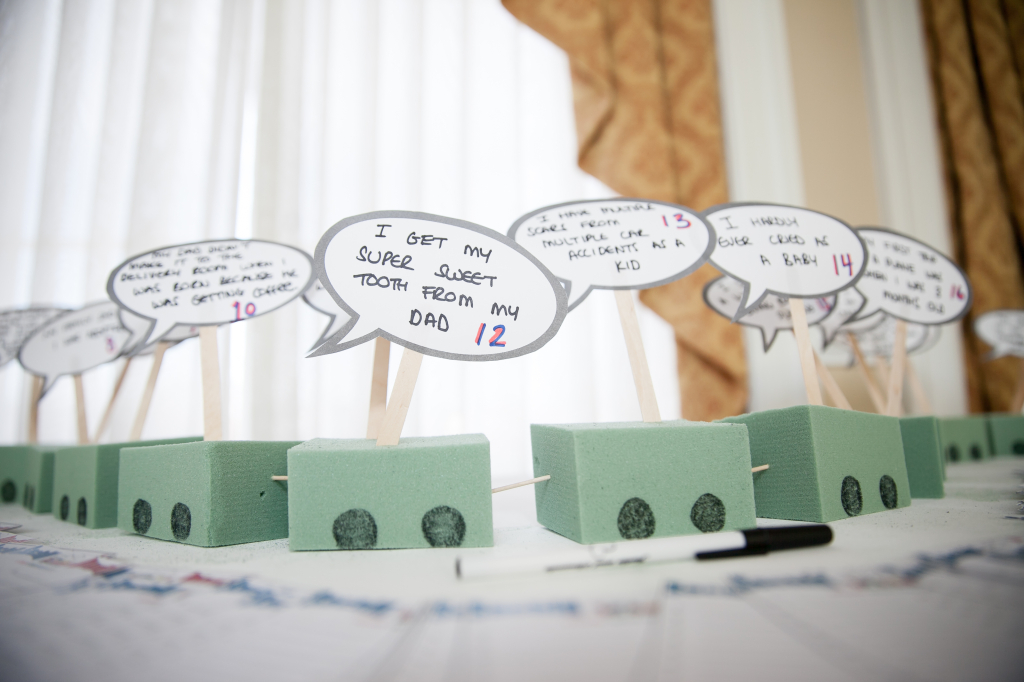 We had an incredible time planning and executing this shower. Dipti was adamant that she didn’t want any decor and no games at the shower, so needless to say, we didn’t bother trying to find a decorator. However, the crazy, pregnant woman that she is, ended up wanting all the bells and whistles last minute and couldn’t help but ask her big sisters to execute. Even though it was a lot of work, it ended up being a beautiful event. We sure hope you love our DIYs in this post and if you do end up trying them, be sure to tag us at #runwaysandrattles. What do you think of these special centerpieces?

We will be posting some fun behind the scenes of these centerpieces on Friday, so be sure to stay tuned! You won’t believe who we got working on these!

Save vs. Splurge – Baby Edition