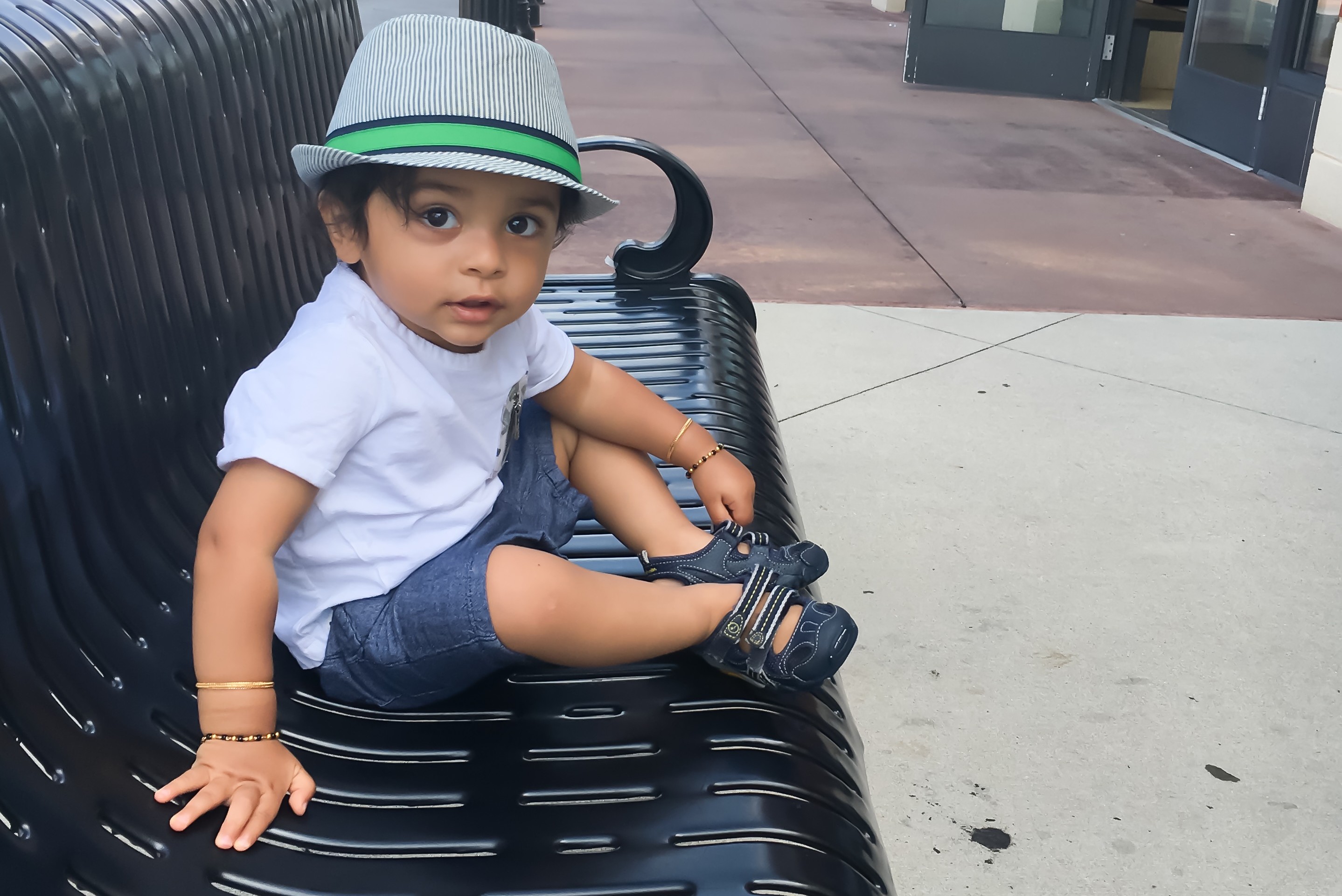 Twelve to eighteen months seems like a difference of twelve months and eighteen years!!! Diav is a spunky, feisty little man now! He walks, talks, and imitates everything and everyone! In these past 6 months we have been through more ups and downs than in the entire first year. Diav was plagued with Hand Foot Mouth when he was 13 months and at the same time took his first steps! He started talking like a mad man and singing too – he loves to sing jai jai songs with his Dada (granddad) and plays the piano himself while doing so! He started going to school (we decided to go with a Montessori) part time and loves hanging out with his friends there! He was finally sleep trained again a few weeks ago though that was a process in itself! Of course he regresses here and there but for the most part, the Junior Dedhia home is sleeping at night finally! D also got his first haircut which was a spur of the moment decision Daddy made and Dipti had no time to even think about! But turned out it was just what he needed (especially cause he could barely see with his little curls in his eyes)! D loves loves the piano, guitar, and these little alphabet magnets his Nina Masi got him (that drive mommy insane when they end up all over the floor)! He went to the Hamptons with his friends for a beach house weekend and finally learned to love the pool!

This should really be Dipti and Sachin’s section as these past 6 months the two of them feel like they went to war together. Diav has become quite the personality lately and getting used to it has been a learning experience for both of them. They got through HFMD which was truly heart wrenching for them as it was the first time Diav had ever been really sick. After that, he started walking and talking and the two of them have been running around like mad people since.

Around 14-15 months Diav started getting bored at home with Dipti all day and Dipti was losing her mind with a toddler all day so they decided to finally send him to day care. They first considered it when he was 15 months and took a visit to the day care his big sisters were in at the time.  Expecting D to love the company of the other kids, Dipti was shocked when D didn’t take well to it at all. Dipti got cold feet real quick so they decided to wait till he was 18 months and give him some time to grow up and understand the process a little more. At 18 months Dipti was ready and so was D apparently! They went to visit a Montessori that some of his little friends go to and they both instantly fell in love. Dipti loved how clean and calm they were, and D loved the teachers and his friends and the new toys! Of course it took a week of crying during drop off (thank goodness that’s Sach’s thing in the morning) and now he whines a little when getting dropped and then forgets his parents and plays with his friends!

Sleep was a big loser in their house for a couple of months. After HFMD D wasn’t able to sleep through the night as he began walking and his teeth were coming in (in a totally random, unconventional order). Dipti and Sachin let it slide for about 5 months where they would put him to sleep at night, coddle him in the middle of the night if he woke up, and put him to sleep for naps. However, Dipti was losing it and Sach was just getting busier at work so they had to make a change. When D was 2 months old they used the ‘cry it out’ method (no judgment please) which worked in 1 night. They’ve been using that method every time he regresses which has been 2-3 times. They knew this time would be harder because he’s older and can stand and scream “mama” and “daddy” (he knows how to make them cave). But they trained him for 2 days and by day 3 he was sleeping through. Apparently he needed the sleep as much as they did!

Mommy Vaid loves to put oil in the kids’ hair as it makes it grow longer and thicker, but also because she says it keeps their mind “cool.” Dipti fell in love with one particular brand that Mommy Vaid started using, Sesa, because it smells glorious and it has made Diav’s hair so soft and long and curly and perfect (lol). Diav is madly in love with his Sandra Boynton books. He knows all of them by heart and loves to say the funny words all the time (like “OOOTS” for “oops”)!  He also loves to go through his ABC cards and knows all of the letters and words by heart (he also loves to impress guests by showing them)! Of course now that D is on the run, every cabinet needs to be locked and every staircase needs to be gated (ugh!!).

Where to even start… Diav is literally a little man who has wants and needs and has something to say about all of it! He’s gone from babbling to full conversation (of course in his own language with familiar words here and there). He blows our minds with the things he remembers – he loves to sing nursery rhymes and remembers them after hearing them once or twice! He also loves his jai jai songs that his Dada sings to him and randomly starts singing them throughout the day! It’s been a roller coaster adjusting to his new antics – whether it be random all out tantrums, or hysterical laughing fits, or a random flood of kisses to mama and daddy. He is all over the place and keeping up with him is exhausting and exhilarating! The amount Sach and Dipti have grown to respect each other and fall more in love with D has been a ride these past 18 months and they can’t wait to see what’s in store for the next 6 months!

Finding a Balance Between Giving and Receiving