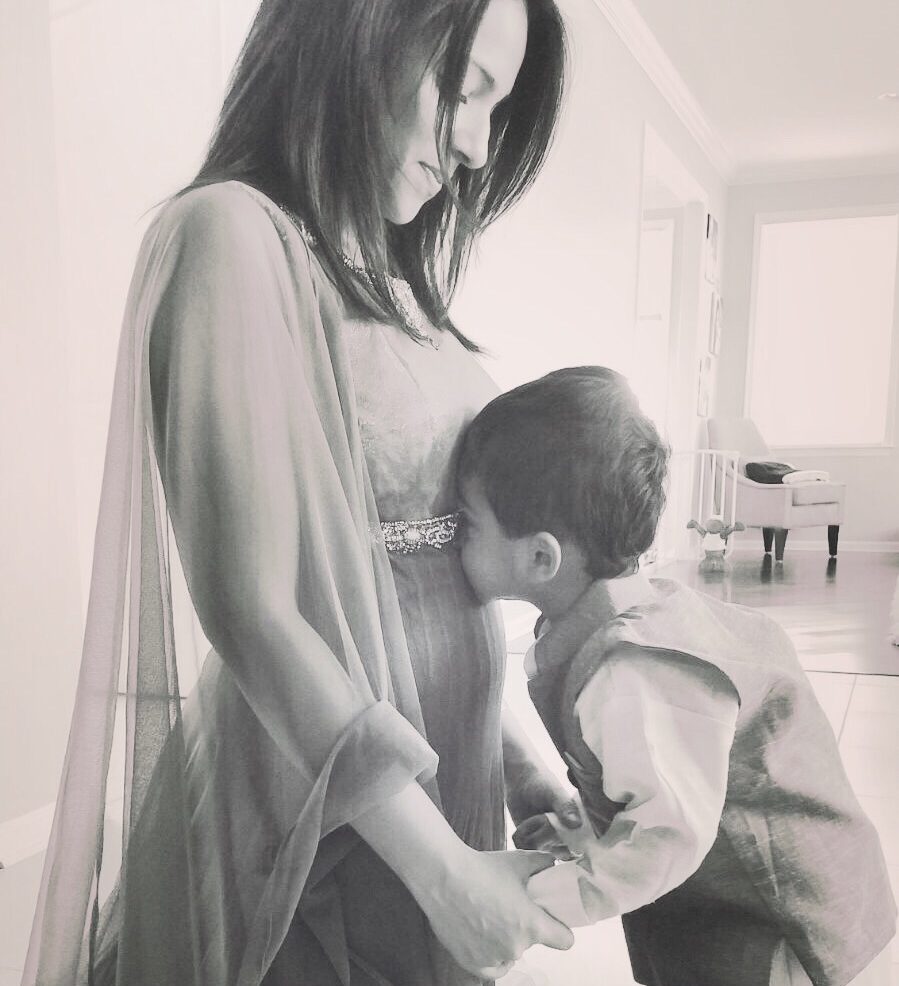 Yes, you read that right… Mommy and Daddy Vaid are awaiting the arrival of grandchild number 8! Dipti and Sachin are so excited to finally give Diav his own little buddy to play with (and by “play with” we mean smother, relentlessly kiss, pull at, baby talk to, and pretend feed – oh and eventually push, hit, pull, kick and then hug and make up). He’s been taking all of his big brother instincts out on Nesa and we’re sure she’s over having 3 older siblings pulling at her! So now it’s Baby Lali’s turn (thanks to Naya and Niva for the name)!

We thought we’d share some of the ways Dipti and Sachin decided to tell their family and friends since, with the second one, they didn’t want to make a big hoopla about it! The reactions, though, are the best part…

The Vaid Parents: for some reason, even with Diav, neither Sach nor Dipti could wait for everyone to be together to tell them. So this time, Dipti had to run some errands at the store and Mommy Vaid happened to be sitting at the desk, doing some work and Dipti just blurted it out! Mommy Vaid was almost in tears of joy as she said, “then Diav will stay with me for the first 6 months while you guys take care of the baby.” Mommy Vaid is convinced Diav is her boy that she never had! Then Dipti told Daddy Vaid by showing him a picture of Diav kissing her belly and his joyful response… “oh great, another one!” Can’t really blame him though… Nana gets an announcement every year it seems!

The Dedhia Parents: Sach also couldn’t wait for everyone to be together so he decided to tell his parents over Facetime. Sach was trying to be a little sly about it by asking Diav about a new toy he got. He kept saying, “is that for you or for the baby?” Both parents were completely oblivious until about the 12th time he said it and then Momma D finally said, “OOOHHHH!” Poppa D then realized what was going on and both parents were ecstatic! They immediately said “don’t worry about India, cancel the trip, stay home and take care of Dipti!”

The Siblings: Gosh, the sisters are the worst! Dipti had stopped by Sheena’s house after her first blood work appointment with the doctor. Of course they were still waiting to tell family since it was barely confirmed that they were pregnant! Sheena was messing around on her computer and needed to test Dipti’s phone to see if it was compatible with something or the other. Dipti, meanwhile, went to finish up Sheena’s dishes (typical). 5 seconds later, Sheena comes bursting into the kitchen saying “I read something and I can’t unread it and I want to unread it but I can’t! It was a message from Sach…. asking how your appointment with the OB went… I can’t unread it!” And that’s how Sheena found out. Nina had unofficially been in the know for quite some time before the announcement and we’re not quite sure what story we’re sticking with about how she found out so let’s just say, she found out and immediately said, “I think it’s a girl… Sheena’s going to kill you.”  Dipti and Sach told the brothers over text and of course they both had an expected reaction.

The Friends: Dipti and Sach really didn’t want to make a big announcement as most of their friends are pregnant and one is delivering anytime now! So it’s kind of expected that they were next in line! And the fact that Dipti hadn’t been drinking for the last 3 hangouts already gave it away! So they had all gotten together for secret santa and 2 of the preggers were talking about how they were feeling and how their pregnancy was going… Dipti asked one of them how far along they were and she said 20 weeks, then the other said oh I’m 19 weeks, and oh so casually Dipti said, oh nice I’m 12 weeks… After they realized what she said, they all erupted in cheers and “I knew it” and “I just told __ that you were definitely pregnant”!

The Gender Reveal: Dipti was super excited about doing a gender reveal with this one as she missed it with Diav. Well, it didn’t quite go as expected. She called the doctor to find out if her results were in and the nurse just blurted out the gender then and there! So she thought it was okay if she wasn’t part of the reveal, she’d set it up. She texted the family to get everyone together and of course, no one wanted to wait a second more to find out. They all demanded she tell them that very second and refused to get together! Well, they won and Dipti and Sachin ended up telling them all through text that it’s a boy :).

Congestion Relief for our Tots