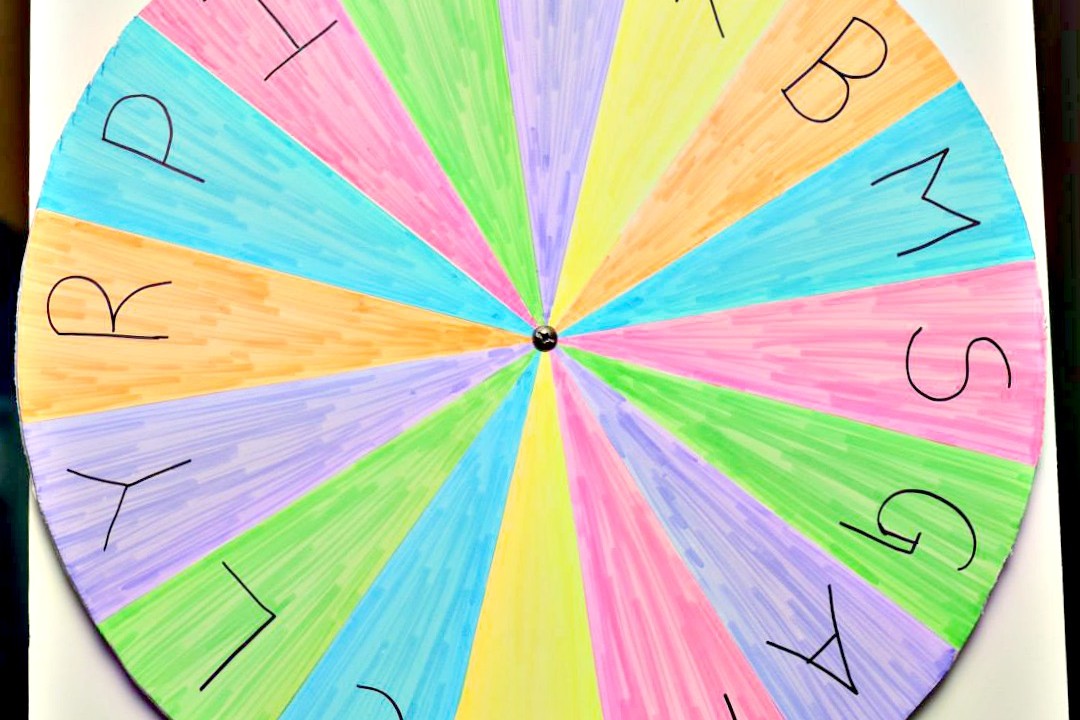 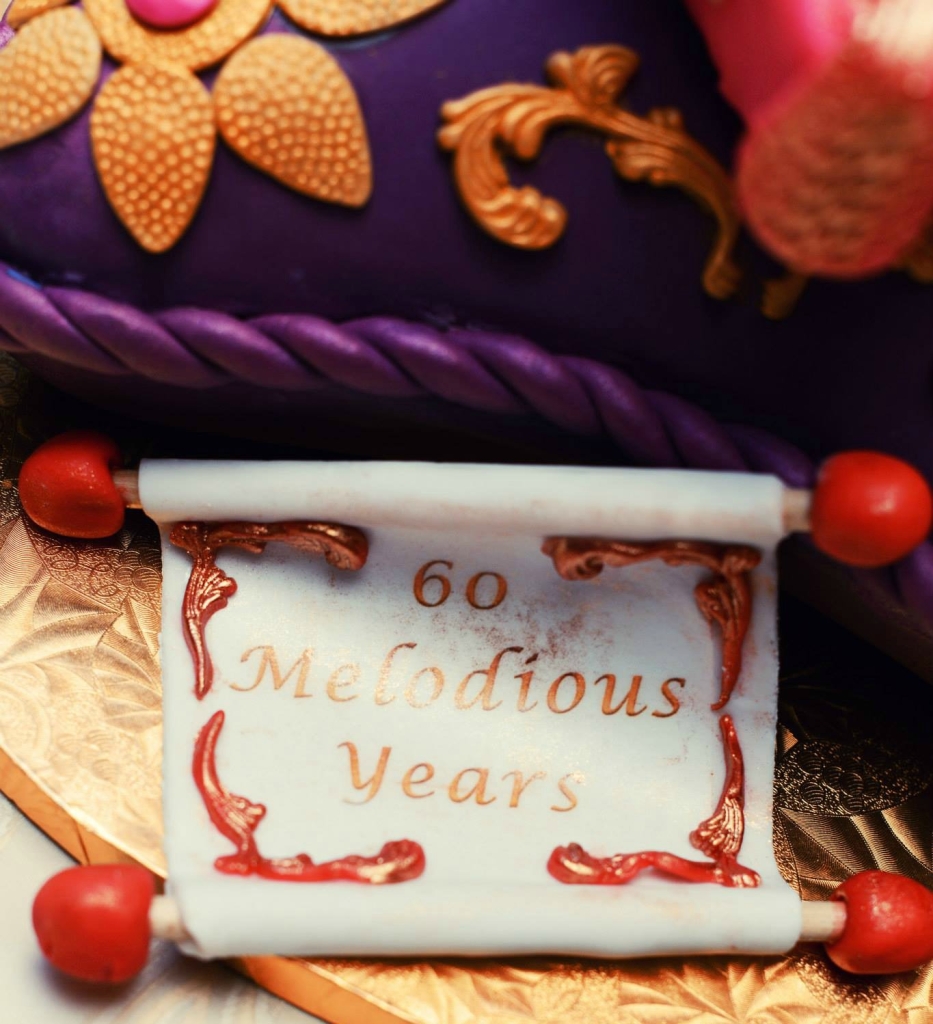 Mommy Vaid just turned the BIG 6 – 0 and we wanted to celebrate in a way that she would love! She loves three things immensely, 1. her family and friends, 2. singing and 3. Bollywood! So the three of us planned a Bollywood Antakshari party for her with all of her family and dear friends! It was an absolute blast! We and our guests had an amazing time singing and dancing the night away. We had a friend Rakesh Raj along with his live band to head the musical portion of the party, our friend, Julie Patel to capture every precious moment and a new friend, Neelma to make an amazing cake for our mommy dearest! We hosted this party at our Dad’s friends banquet hall, The Imperia, who is always there to host whenever we need!

We were adamant on hosting a more structured Antakshari party as when the guests are put on the spot to sing, most usually shy away and hide behind the singers of the group. As guests arrived to the party, we randomly gave each person a colored wrist band. Once all guests were there, we used the 4 corners of the dance floor as the team locations with the band in the front. For “Spin Antakshari” each team sent up one member to spin the board. Which ever letter the arrow was pointing too, they had to sing a song starting with that letter. For “Bollywood Antakshari Jeopardy” we chose “years” as our categories (1950s, 1960s, etc) and tiered it from easiest (100 points) to hardest (500 points) with clues. Teams chose a point level, guessed the song, and earned that many points! For “Bollywood Antakshari Charades” we wrote down different songs on little notes and mixed it up in a bowl. A team member would come and chose a note and have to act out the song (in 20 seconds) for their team to guess. Most of the time we called people to come up and participate ensuring everyone got involved. In the end, there was no real winner, but the fun and competition that ensued was hilarious and memorable!!! Friends left calling it the “most fun boutique party” they had been to in a long time – true to Mommy Vaid’s style!

We are sharing our home-made games with you along with a DIY step-by-step tutorial on each one! 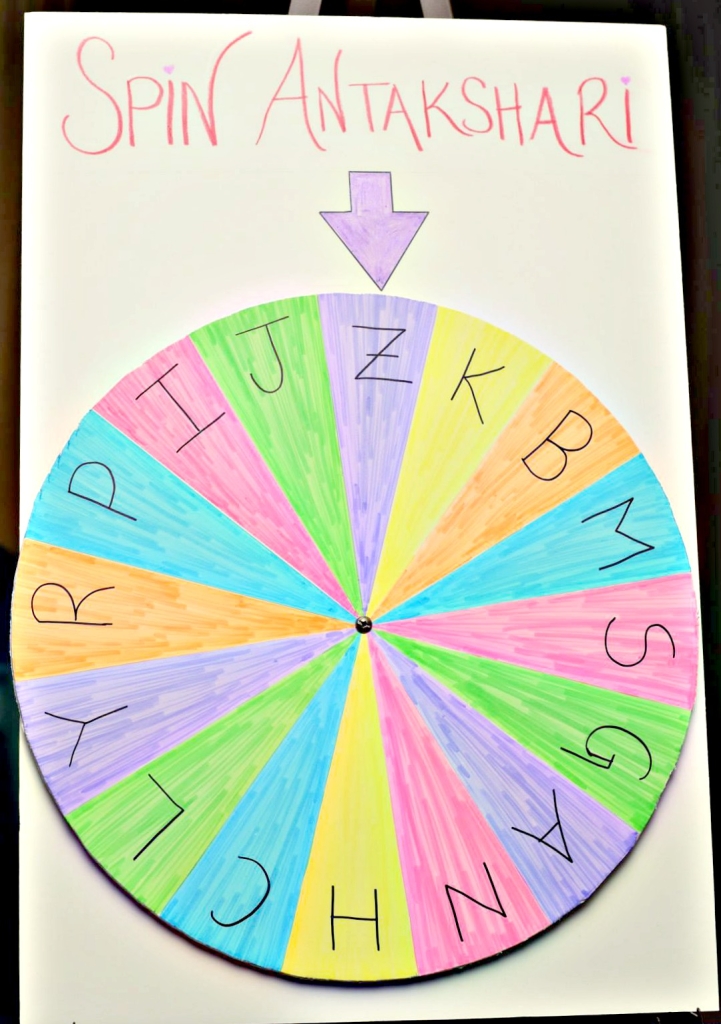 For the Spin Antakshari Board, we bought two poster board foam boards from Michaels. We took one of them and using an utility knife, cut it into a circle. Using a ruler, we drew out lines from the center breaking the circle up into 16 triangles. We colored each one in and wrote a letter with a black marker. We poked a hole through the center of the circle and directly behind it another hole through the large white board. We took a flat bottom screw, poked it through the circle, added a 1/4 inch washer between the circle board and the rectangular board. After the washer, we put the screw through the large board and added another washer and bolt to the back of the large board. We drew in an arrow above the circle. At the event, we placed the board on an easel and played away! 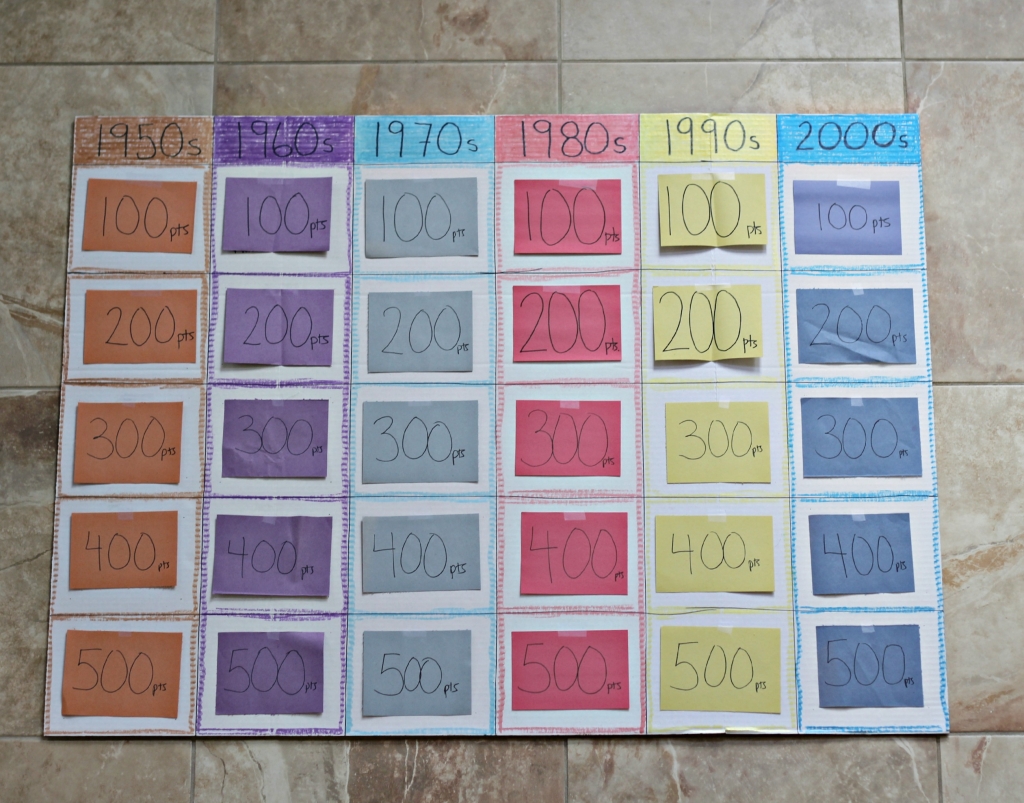 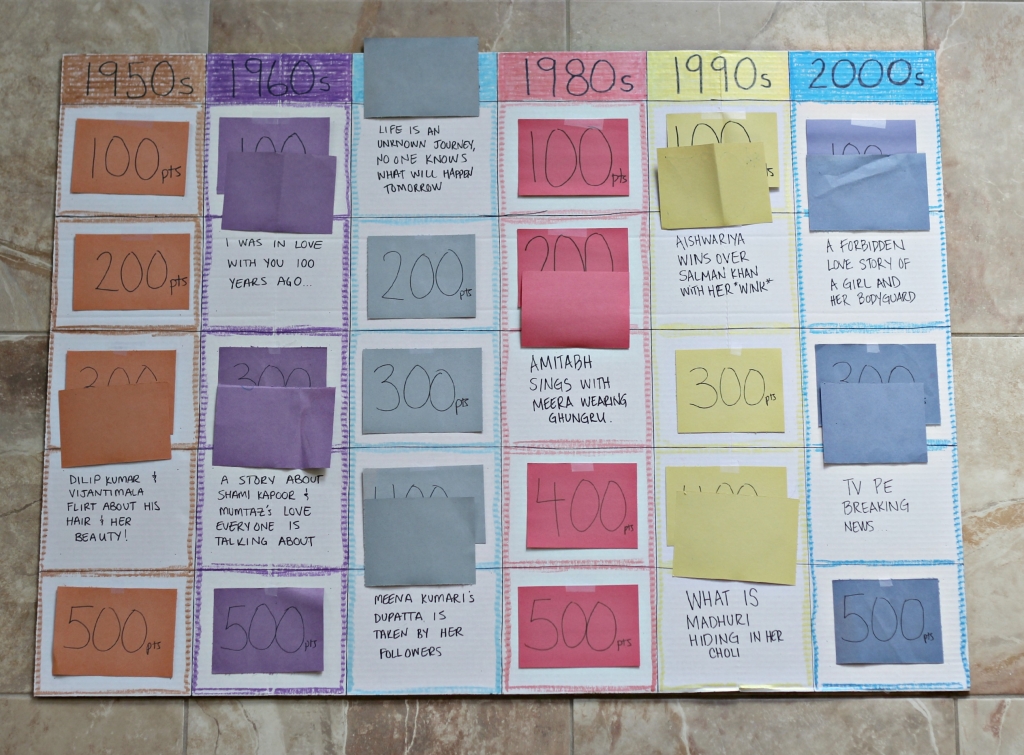 For Bollywood Antakshari Jeopardy, we purchased a white presentation board and a stack of multi-color construction paper. Easy enough, we broke the board up into 6 columns and 6 rows (with the title row being slightly smaller). We measured it out with a ruler to make sure each square was even. We jazzed it up with some color for fun. We created the categories into years and the clues went from easiest to hardest with corresponding points. We used a small piece of tape to place each colored paper on top of the clue and pulled it off when the team picked their choice. Here are the clues and answers we used for this game! Here are the coveted clues and answers for this board! 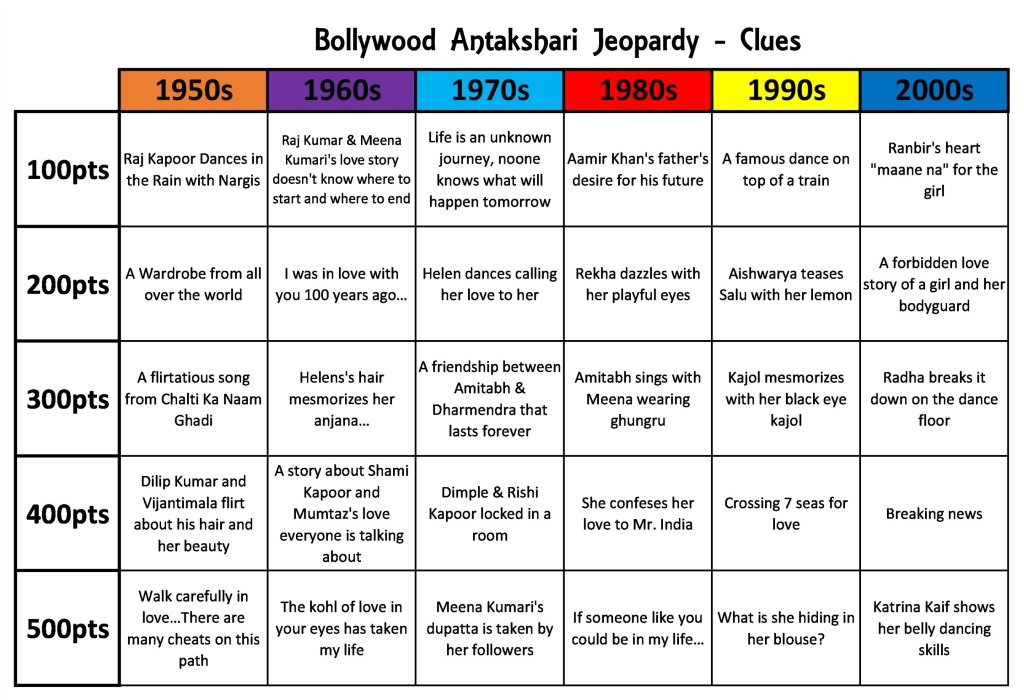 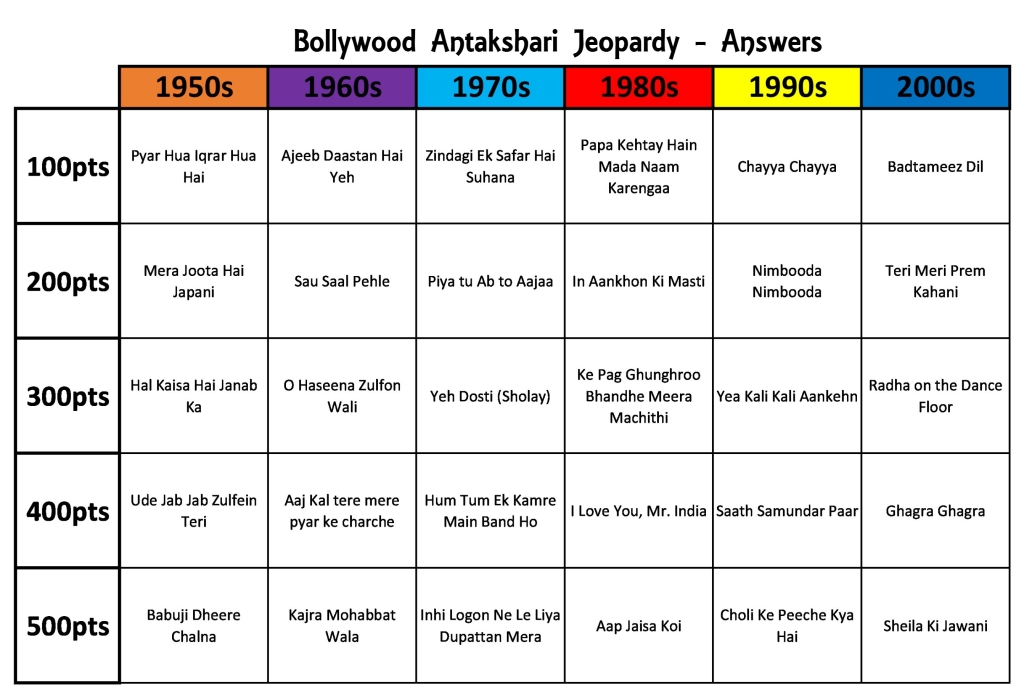 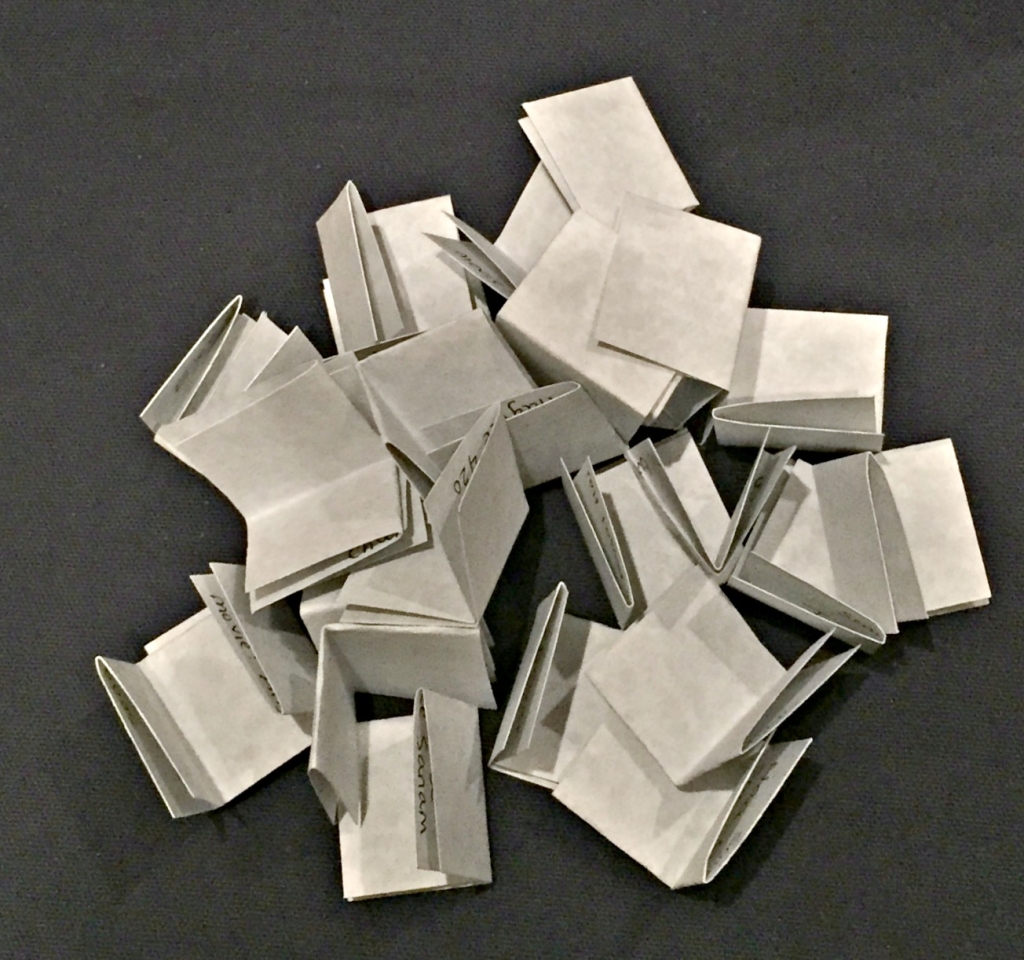 For Antakshari Charades, we wrote down a bunch of hit songs on little note cards for guests to pick from and act out. We tried to chose mostly item songs or songs with very specific Bollywood dance moves to make it slightly easier for the people guessing and acting! Here is our list of those Bollywood songs! 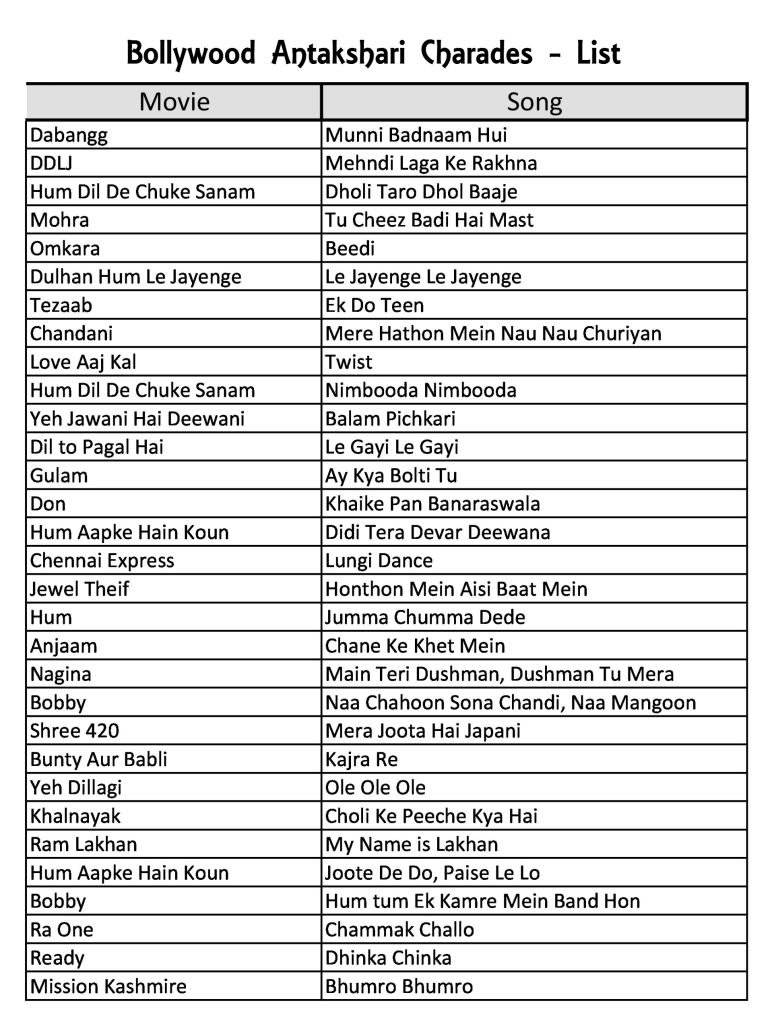 Leave us your thoughts and comments below. If you do happen to use any of these ideas at your next event, be sure to share with us by tagging us on twitter at @runwaysrattles, our instagram hashtag #runwaysandrattles and of course our facebook page, @runways&rattles!