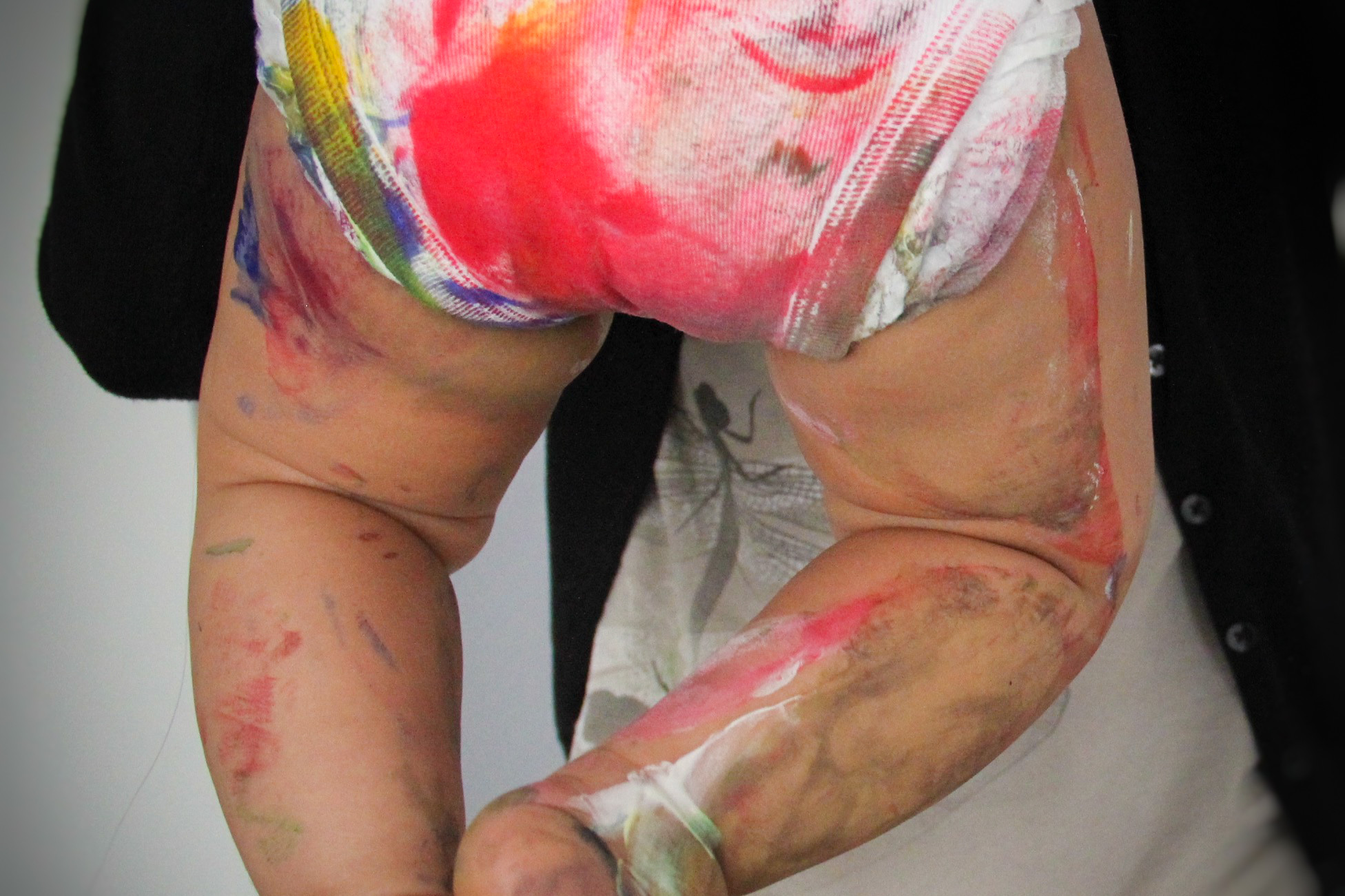 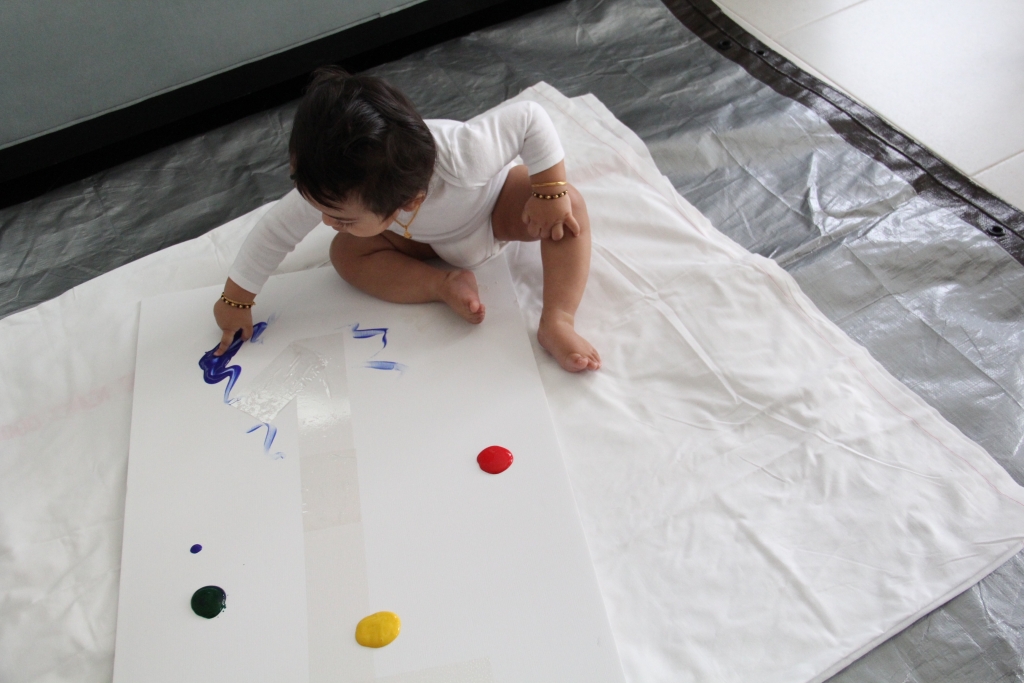 Our baby boy Diav is one year old and we can hardly believe it! Dipti wanted to change up the usual cake smash and decided to celebrate this milestone by letting Diav create his first masterpiece! What a world of difference 3 months makes! As you may recall from his 9 month update, D was in full blown protest against crawling or moving at all. Well, as usual, this child of ours decided that he would cruise and crawl all at the same time! He surprised us all when he climbed up on the couch and decided to walk along it and then fell and started crawling! Of course Dipti wasn’t home to witness any of it – Daddy’s boy decided to share this glorious first moment with daddy only! He has also expanded his vocabulary to include sounds we can barely mimic! Dipti is convinced he is saying “Naya” but that might be wishful thinking!

Our baby is also learning new tricks every day! Dipti saw him mimicking her when he copied her doing “peek-a-boo” and soon realized it was time to teach him fun stuff! He gives us “fly kisses,” puts his hand to his ear when we say “hello,” puts his hands together and bows when we tell him to do “jai jai” (prayer), and our favorite, he gives us millions of kisses on our cheek! Dipti is starting to teach him some basic sign language too – like “more” and “all done” to see if he can learn that association too! 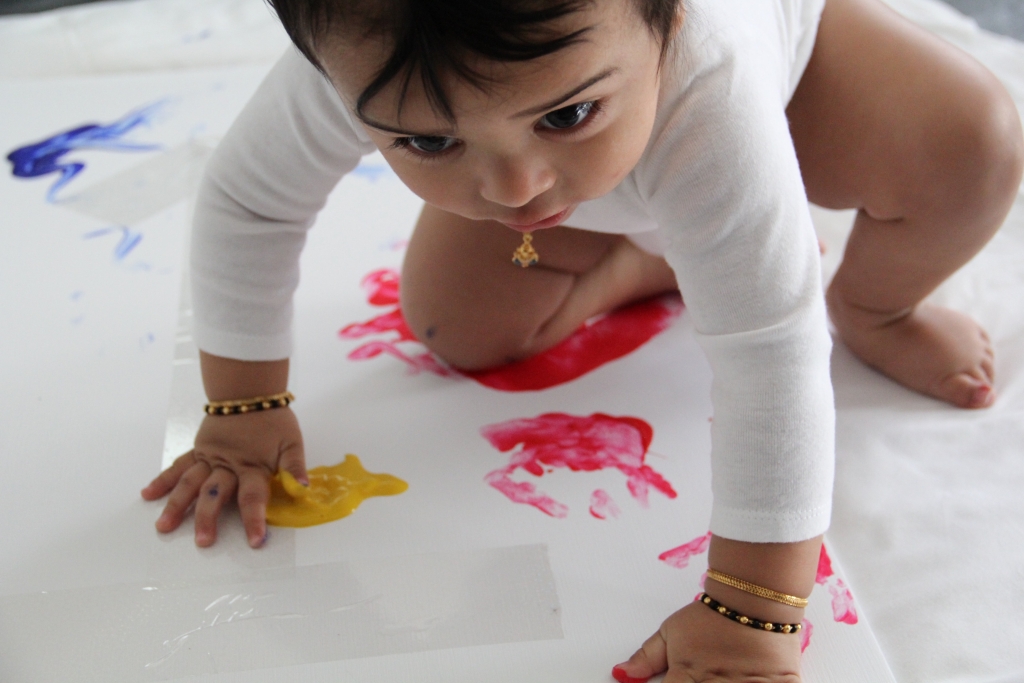 Dipti is beyond shocked to see how much Diav has developed in the last 3 months. At times he drives her insane with his stubbornness, his bouts of anger, and his tiny tantrums! But more than that, she is amazed at how much he has grown as a little man – he listens, he tells her what he wants (in his own cute way), and he loves so so hard. He has also become quite the social butterfly! Mommy Vaid gives Dipti a little break by taking Diav to her store where he interacts with the staff and customers all day and he just thrives – people can’t get enough of his little personality! Knowing that D loves to socialize so much, Dipti has been struggling to find more outlets for him during this cold season. She started Gymboree and play classes and has also started actively meeting moms of similar age kids so that D can get some play time with friends. 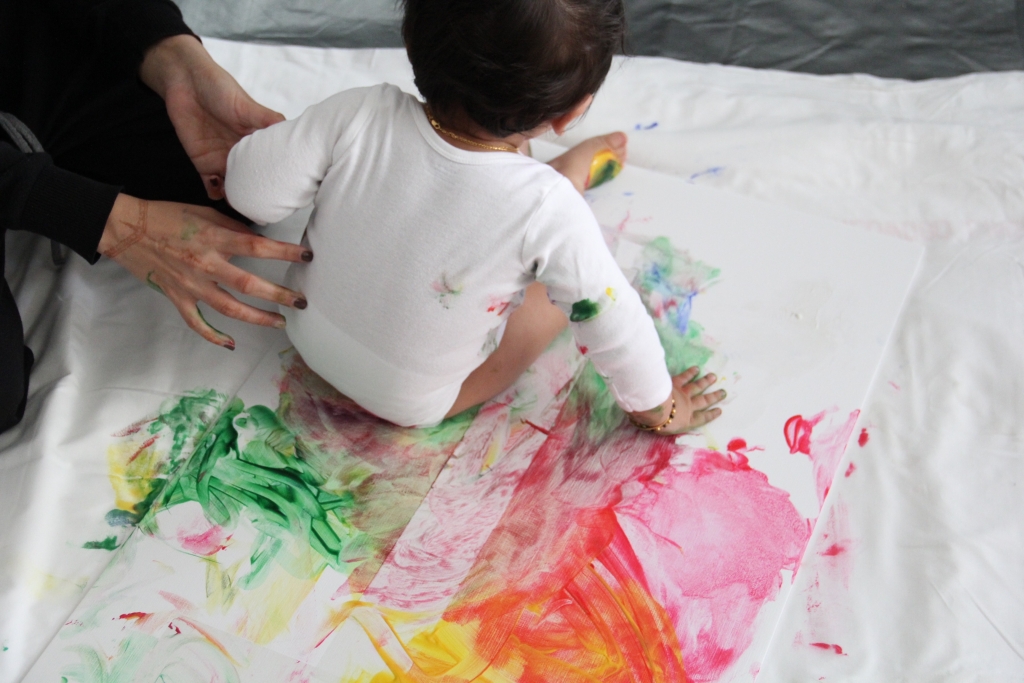 Now that D is finally eating food that Dipti makes for him, Dipti’s favorite food processor is the Magic Baby Bullet. D still likes his foods mostly pureed and the bullet is a quick and easy way to make things fresh! She likes to make his veggies all at once and freeze them in containers (post to come) and using the bullet is the perfect way to puree and portion! She also uses it when she purees his fruits when he’s going to eat them right away – so easy! Now that D is on the move, Dipti likes to put him in comfy, malleable clothes so that he can go in any direction. She is beyond in love with these Zara pants that look formal but are really sweats! Finally, Dipti got these super comfy sleep suits while D is a growing boy. They are perfect for the cold weather now with his blanket, and for the warmer nights to keep him covered but not too hot! 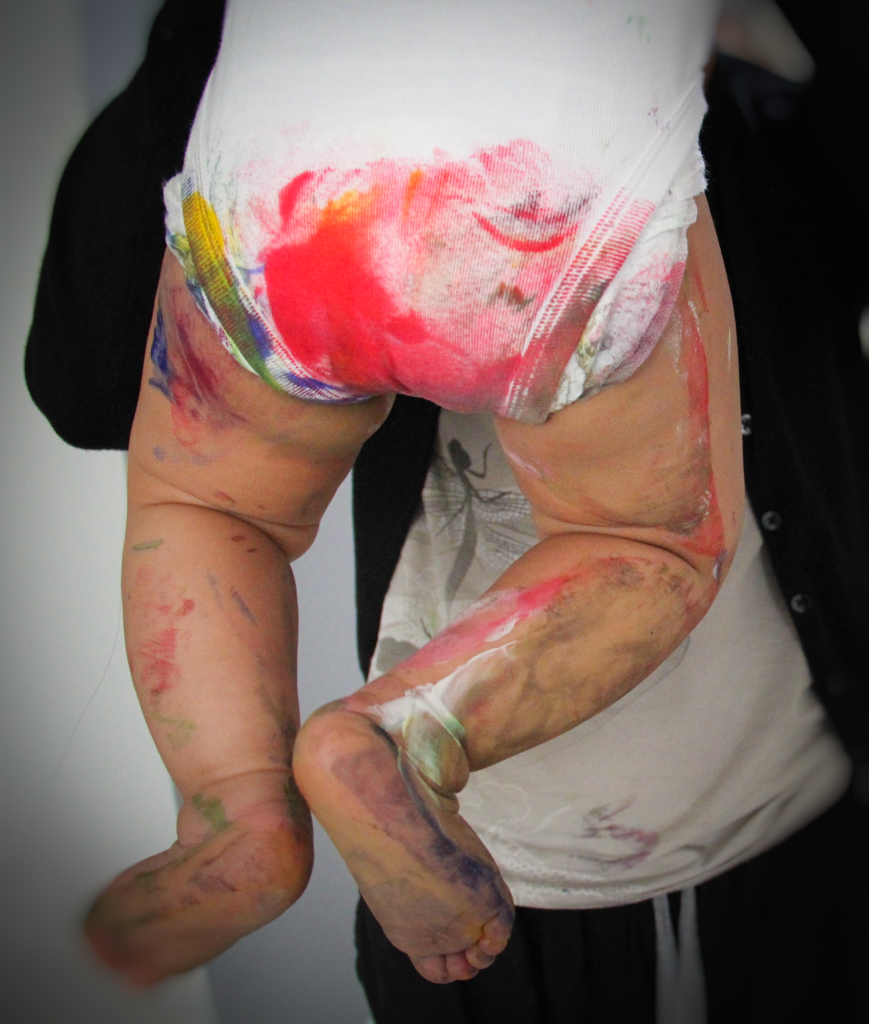 We recently took Diav on his first trip to Orlando, FL for a wedding and we were beyond terrified of his reaction of the pressure changes on the plane because we didn’t have the binky to fall back on. To our surprise, Diav was perfectly fine! We made sure he was drinking during take off and landing, but for the most part he did great! Diav has also astonished us (and kind of made Dipti jealous) at how much he loves to be away from home! He loves to sleep at his nani’s house more than he does at home, and he slept like an angel in the hotel in Florida! When it came time to sleep at home, he was up at all hours of the night torturing his parents! The biggest surprise of all though is how much D has fallen in love with the other kids! At first we thought it was just him being cute, but when the other kids walk into the room D’s face lights up, he can’t contain his excitement, and doesn’t want to do anything but be around them! We thought he’d hate sharing his toys and the attention but he absolutely adores them and wants to spend every possible moment with them! 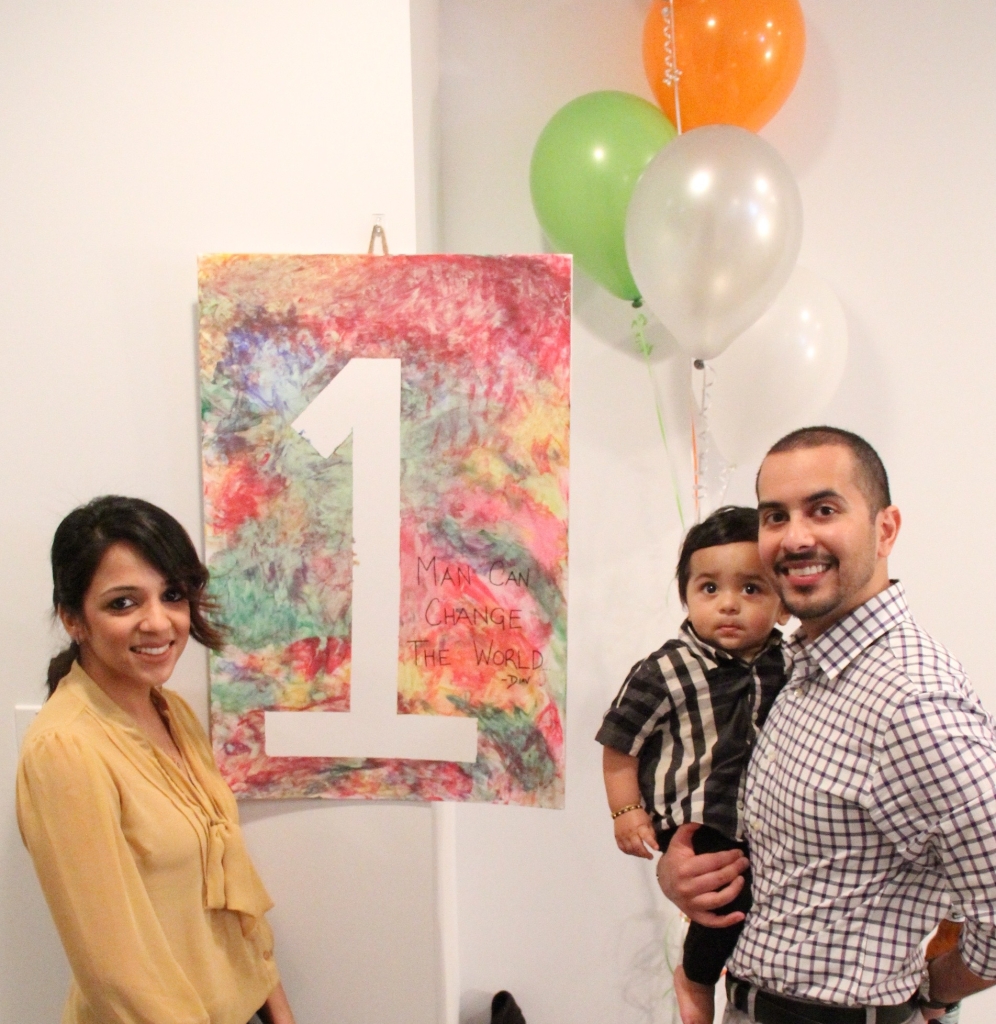 As always, thank you so much for your support in baby D’s journey! xo